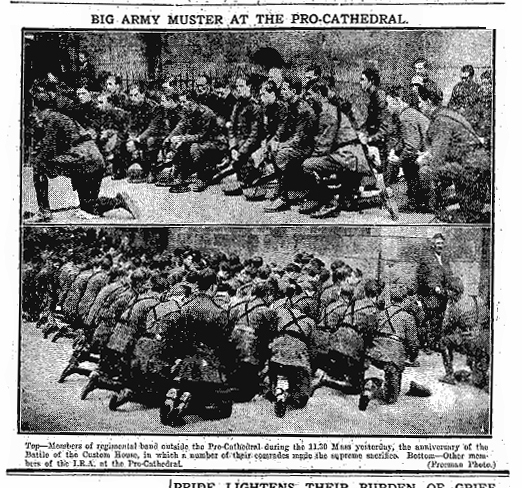 The first anniversary of the battle of the Custom House was commemorated – on a Thursday that year – with a range of services across the city. Masses were held at St Agatha’s Church, North William St. & also at the Pro-Cathedral. The huge attendance at both of these events included the names of many men who will feature prominently throughout this blog – names like Joe Leonard, Tom Kehoe, Padraig O’Connor & Paddy O’Daly. We were particularly pleased that Vinny Byrne was mentioned as he would later become the chief organiser of the annual commemoration.

A ceremony was also held on the Beresford Place side of the ruined Custom House building, attended by over 300 troops from Portobello Barracks under the command of Commandant O’Daly. Meanwhile, in Howth, men from D Coy, 2nd Battalion attended a memorial mass for Dan Head followed by a further ceremony in Kilbarrack Cemetery. 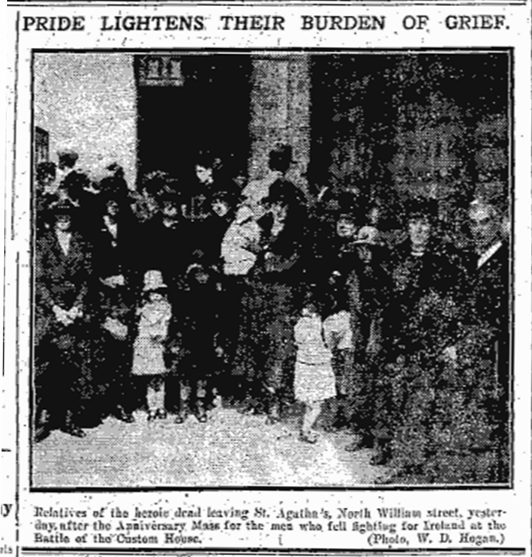 The events were covered by most of the Irish Newspapers and there is also a brief reference to the day’s events in the Yorkshire Post of 26 May.

The second anniversary in 1923 reflected the very difficult times in Ireland at that stage and was a much more low key event.  An anniversary mass was held in Kehoe Barracks, during which, the Rev. F.A. Gleeson – Dublin Command Chaplain – referred to the “great task of rebuilding, reconstructing and regenerating the Nation, both morally & materially”. As an avowed non-political blog we will reserve any comment on how much of this task has been achieved!

We have been unable to find any other references to Commemorations in 1923.

A feature of nearly every Commemoration, including those that continued into the 1980’s, is that they were always tied into a religious event, usually Mass or prayers. For any younger, or non-Irish, readers this does not mean that the Custom House men, as they were commonly called, were particularly religious. It merely reflects the culture in Ireland for the vast majority of people for most of the 20th century.