There were only three images of Dan Head that we knew about when researching the lad (But see the update at the end of this article, below). 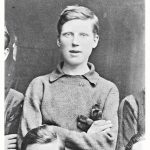 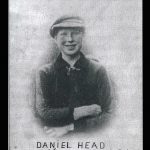 These first two show Dan as goalkeeper for his local team (From NLI); and wearing his trademark cap on the family’s memorial card. The third, which appears below, has become an iconic image of the Burning of the Custom House.

Daniel Joseph Head was born in Holles Street Hospital on 9 July 1903, the first surviving child of Michael and Mary née Hammond of Lower Charles Street. He had a few interesting ancestors. Maternal grandfather Joseph had been a lighthouse keeper in many parts of Ireland. His father’s father, also Daniel, had been a member of the Fenians and  Invincibles, a Master Craftsman and a Freeman of Dublin. The Heads had been shipwrights in previous generations. Dan’s own father Mickey worked as a carpenter and boxed professionally in the late 1890s and early 1900s.

Moving to Ballybough, Dan went to school at Marino CBS. The kid was football mad and played GAA as well as soccer. He became goalie and captain of his soccer team Fairview Celtic FC. Following his father’s trade, he trained as an apprentice carpenter.

He also showed wisdom beyond his years. Domestic family life was not peaceful. Dan’s parents had a tempestuous relationship. His father could be very difficult, possibly after bad experiences in France during WW1. Or perhaps from the effects of prize-fighting. However, teenager Dan had an ability to calm things down and was a great peacemaker. He acted as more than a big brother to his siblings and bought them treats with his wages as well as contributing to the family’s upkeep. His kid brother Antoine (aka Tony, born in Brussels!) later wrote glowingly of Dan.

He had joined Na Fianna in 1915, then the Volunteers, 2nd Battalion in 1919. He took part in D Coy operations, mainly street ambushes in which he used grenades. He was both street-wise and clever and became an experienced urban guerrilla fighter. He stashed weapons in his parents’ house (dumped by his dad after Dan’s death). A near neighbour and pal was Richard McGrath, also arrested at the Burning.

Family lore has it that on 25 May 1921, Dan had arranged to do something with his sister. To her annoyance, after word came that there was ‘a job on’, he immediately left to join his D Coy comrades. Admiringly stroking the ornately carved hardwood furniture in the Custom House offices, he remarked on its high quality to fellow carpenter and IRA comrade McGrath. Dan remarked it was a terrible shame they had to destroy it (Thanks Margaret and Aisling).

Nevertheless, he did his duty. After carrying a few tins of paraffin into the building, scattering papers and files, smashing up the woodwork and dousing all with the flammable liquid, his job was done. He got separated from his pal Richie and saw the arrival of the Auxiliaries’ vehicles on Beresford Place. Despite a warning to be careful from an older comrade Phil Flynn, Dan’s youthful courage drew him towards them, near the railway bridge pillars beside the Custom House. His instinct kicked in then. Darting out, he threw his grenade into one tender disabling the occupants and wounding six, four seriously. Five Auxies were put out of the battle.

The kid was then hit five times by the accompanying armoured car’s machine gun fire and died instantly.

The diversion enabled some of his colleagues to escape the deadly volleys sweeping the area. Both Brigade O/C Oscar Traynor & Squad O/C Paddy O’Daly paid handsome tributes to young Volunteer Head’s bravery and action which saved their lives and allowed them to get away that day.

At the military inquiry, his father said “He was a simple boy and very fond of football…..he would probably be slightly  Nationalist if anything”. In fact Michael well knew of Dan’s IRA activities. The pair used to quietly review them at home in the evenings. Michael knew where Dan stashed his arms. But he was never going to tell that to the enemy. The inquiry took his evidence at face value. The verdict was the rather strange ‘shot by persons unknown, accidental death’.

For his well-attended funeral, Dan’s coffin was draped with the Tricolour and his trademark cap. He reposed in St. Agatha’s church alongside another IRA fatality from the Burning, Capt. Paddy O’Reilly (one of two brothers also killed in the operation). Daniel Head was buried in Kilbarrack Cemetery (plot BC8, towards the back of the cemetery, left side). 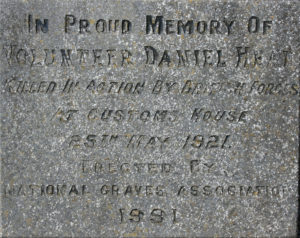 NGA plaque on Dan’s plot, Kilbarrack. His parents’ names are also marked on the family headstone shown on right. Not far beyond the impressive memorial to theFloodsFrom that, turn to your right and keep an eye out on your right side. 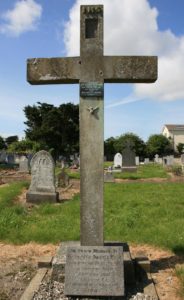 After Dan was killed his mother Mary had to separate from her husband and led a tough life afterwards. A year after his death, a benefit soccer match was hosted by Bohemian F.C. at Dalymount Park to help the family. It would take more than 30 years after losing her son for Mary to receive a small military dependent’s pension, shortly before her death. The family subsequently disintegrated and are scattered from Sligo, to parts of England and as far away as New Zealand. But everywhere the memory of Dan and pride in his short life and sacrifice for his country burns bright.

Dan Head was only 17 when he died – but he was not forgotten and has left a lasting legacy. His parents posted memorial notices for 30 straight years in the newspapers. His D Coy pals did so several times, even during the Civil War (As sadly divided ‘Regulars’ and ‘Executive’ IRA). He gets a mention near the conclusion of the famous Brendan Behan book, Borstal Boy. The later day young IRA man wrote about returning home by ship in 1941 after imprisonment in England. He was sailing into Dublin Bay and enjoying familiar views:

“…..So many belonging to me lay buried in Kilbarrack….and I thought I could see the tricolour waving over Dan Head’s grave.”

That tricolour entered local lore and was a beacon for republicans for years. It had been erected there by Dan’s broken-hearted and in many ways tragic father Michael. He lovingly renewed the flag and tended Dan’s grave till his death in 1947.

Dan’s bravery at the Burning, rightfully recorded by his senior officers, can be read in both their Witness Statements.

However, possibly the young Volunteer will be remembered most in the very sad, bleak and iconic image below. 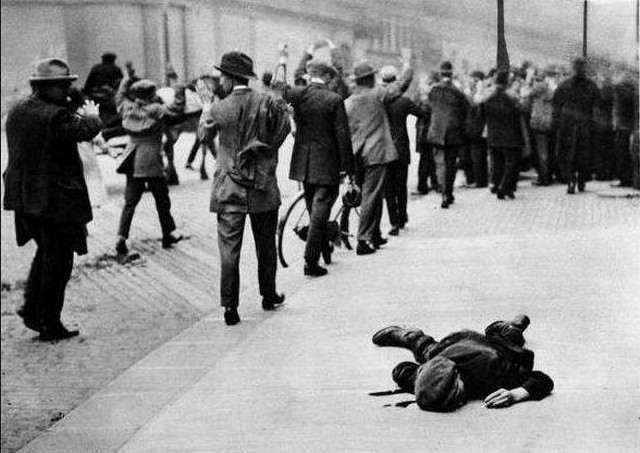 May he rest in peace.

A fascinating book on Dan’s short life “The Boy in the Picture” by Michael McKee a nephew of the lad, was published in 2018 by Mícheál Ó Doibhilín’s Kilmainham Tales Teo. There was an international gathering of the Head clan at the launch in Dublin. This writer was privileged to take part in an event about one of my boyhood heroes.

Michael’s book gives many insights into Dan’s character, IRA career, family circumstances and social conditions of the times. Clever use is made of a memoir written by Dan’s younger brother Antoine (Tony) and includes many family photos. One shows Dan aged three – in a dress! But, not to worry, that was an old tradition back then; disguise infant boys as girls, so the fairies wouldn’t steal them away. No more spoilers, sorry….. 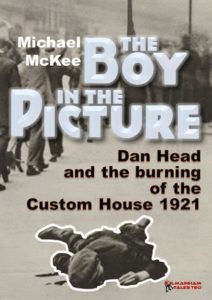 The book can be obtained here.

And finally, there is yet another photo of Dan proudly displayed but jealously guarded in the home of a branch of the Head family in the Liverpool area (They also have at least one other priceless Dan memento). The writer was given a copy under pain of death if it were published. No, seriously, I am very grateful the heirloom was shared with me. But having been asked to keep it private, unless things change, I cannot publish it anywhere.