Despite sharing such a famous name, this James Connolly sadly lived and died in relative obscurity.

If we rely on newspaper reports of the time for any details, initially they got them all wrong. James was first said to be aged 37, a Labourer and father of five from Gardiner Street (very close to the Custom House). Or a 63 year old Quay Labourer.

The truth was that on the morning of 25 May, James Connolly had been, as usual, at work on the Liffey quays at the Custom House. During the street battle after the Auxies arrived, James was killed at the nearby Beresford Place-Gardiner Street junction. He was probably going home to his wife at 26 Lower Gardiner Street for lunch (or dinner as known to old Dubs). An uninvolved passer-by, ‘collateral damage’ in an urban conflict. James was shot in the back, close to the heart. Brought to King George V Military Hospital on 25 May 1921, he was dead on arrival. 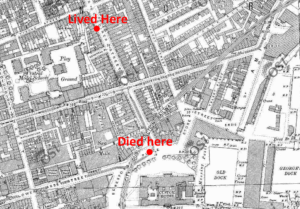 His widow Maryanne attended the Military Inquiry into the Custom House deaths held in the hospital on 27 May. She had to identify the body and testified “… my husband James Connolly was 50 years old. He was a quay labourer working for Heiton [an old Dublin builders’ providers]. He never mentioned politics and as far as I know had nothing to do with them”.

The inquiry verdict was “accidental death, shot by some person or persons unknown”. In all probability James Connolly was a victim of the armoured car’s machine gun fire sweeping the streets around the Custom House. The papers reported little on that and nothing about his funeral.

The majority of ordinary working men like James didn’t feature in those days. Unless they died in a work accident or were in court on some charge. “Lucky enough” to have any job, they’d no property. Certainly no tax, voting or employment records. Not even an entry in street directories.

There are death and burial records for James, so we know his wife was Maryanne, their address at his death, his occupation and grave location. But little else.

As far as can be determined James was a Dubliner who, it appears, married Maryanne Austin (a widow née Murphy) at St Nicholas of Myra Church, Francis Street, Dublin in 1892. They lived on Golden Lane at that time and were to move home several times over the years as was the way of life for the majority of inner city families back then.

There is a hint that James was actually a bit older than 50 when he died. According to the most likely census record in 1911 (for 5 Middle Gardiner Street), he was then aged 46, had been married 20 years and the couple had lost their only child.

It seems the unfortunate man left behind no family but his widow. And probably little if anything of material value. He does not have a marker on his resting place in a common grave shared with five other unrelated people in Glasnevin (plot QB76). Even the building where he lived on Gardiner Street is gone, replaced by apartments. Fate seems to be conspiring to hide most traces of him!

Subsequent life for Maryanne Connolly remains uncertain but, without her breadwinner, it was surely not easy. At the time of James’ death they lived in ‘Tenements’, so the landlord still had to be paid as did food, clothing and living expenses. On top of that came her husband’s funeral and burial costs. As the illiterate widow of a ‘labouring man’ in those times, she didn’t have any golden parachutes let alone a welfare safety net. You’d wonder if Heiton’s, as James’ employers, helped in some way. Perhaps her neighbours chipped in with a bit of their hard-earned cash.

There is no trace of the woman receiving any compensation for her loss. She probably didn’t even know how to make such a claim. Two things are certain, however. Maryanne is long deceased and was not buried with her late husband.

At this remove almost a century later, all we can do is acknowledge and respect the memory of James Connolly as an innocent casualty at the Burning. And try to keep alive the names of this particular Connolly couple who lived, loved, worked and died in Dublin.