Charlie MacMahon – GAA star with bullet in his brain

Shot in the head at the burning of the Custom House, Charlie had started his Revolutionary career at the tender age of 10.

He suffered other wounds before and after the Custom House.

But remarkably he won GAA Championship medals and lived to 83.

Charles Eugene MacMahon was born in Ballina, Co Mayo on 3 August 1904. His father Felix was a Timber Merchant & Builder from Co Tyrone and  mother Nellie (Boyle) a Donegal woman. Charlie had five sisters and one brother. The family moved to Dublin around 1912/13.

In his pension application Charlie says he was at the 1914 Howth arms landing with Na Fianna and at Easter 1916 spent 3 days in the GPO, doing despatch and food deliveries to the Manure Works and Amiens Street (now Connolly) Railway Station. Reassuringly, he adds that as an 11-year old he went home each night! Because of his extreme youth, he was ordered home finally on the Wednesday.

In late 1918 he joined B Coy, 2nd Battalion of the Dublin Brigade Volunteers and initially did intelligence work including hold-ups of despatch riders and commandeering cars from hostile loyalists. He was not full-time and also worked with his father in the building & joinery trade.

MacMahon took part in the attempted ambush on a troop train at Killester and on Auxies at Ballybough in early 1921. After the ambush at The Thatch, Whitehall he suffered severe injury to his ‘man-bits’ as well as badly torn hands from slipping and falling from a high gate covered in barbed wire.

He was in the April attack on the Auxy base at the London & North Western Railway Hotel on North Wall and shortly before the Custom House operation was involved in an armed hold up at the British Oil Co depot in Sheriff St to get fuel for the Burning.

Shot in the Head

On 25 May, after being wounded on duty in the Custom House, he was captured and taken to King George V (now St Bricin’s) Military Hospital. There, RAMC surgeons fitted a metal plate in his skull. The bullet could not be removed, however. Attempting to do so was considered too risky by the military doctors.

Back to a Soldier’s Life

There are references on his pension file to both escape and release from the military hospital, but it is not clear how or when he left there. In any event, MacMahon suffered epileptic fits and partial deafness from his head wound – the bullet was lodged at the back of his brain – and was unable to do his former work.

Nevertheless – incredibly – he joined the new National Army on 27 February 1922. When Civil War broke out he was in the assault force at the Four Courts, coming from Winetavern Street. There he was again wounded by glass splinters in the head, face and hands. Corporal MacMahon stayed in the Army until he was medically discharged (Character & Conduct Very Good) on 3 January 1924.

Suffering increasing agonies from his head wound, Charlie attended a succession of doctors and surgeons. Their advice was against attempting surgery which would likely leave him as “an imbecile” (as the term of the time put it). His parents were very closely involved in supporting him, financially and otherwise, as he readily acknowledged.

A New Lease of Life at Last

Eventually, top surgeon Sir William de Courcy Wheeler at Mercer’s Hospital decided he could operate. He successfully removed the bullet on 10 December 1925. Charlie recovered so well he was able to resume work as a Quantity Surveyor. In 1937 he married Róise MacMullan. They had 3 sons and 3 daughters and lived in Malahide, Finglas and finally Raheny for many years.

Sports Star
Like many others in the IRA, Charlie was a serious GAA man. He was a leading player in his day in both codes – football with St Laurence O’Tooles and hurling for Kevin’s, Young Ireland and Dublin.
Kevin’s club history refers to him as a legendary hurler.
He captained the Dub hurlers in 1932 & 1934 when they lost the Leinster & All-Ireland finals. But Charlie did win the All-Ireland in 1938 (v Waterford), four Leinster titles and two League titles in 1929 & 1939. 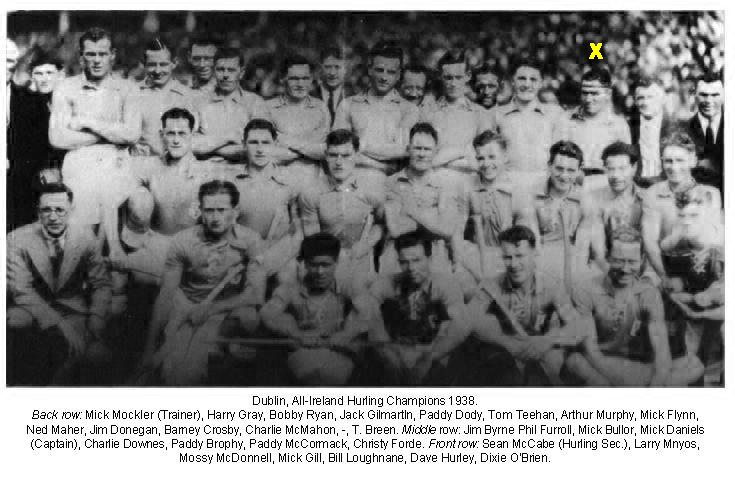 Some recovery and sporting record for a man who’d carried a bullet in his brain for nearly 5 years!

Sadly, Charles MacMahon lost his sight in the 1980’s and he died on 5 December 1987. He was buried in plot C551, Fingal Cemetery (on the opposite side of the road to Balgriffin Cemetery) in north co Dublin.