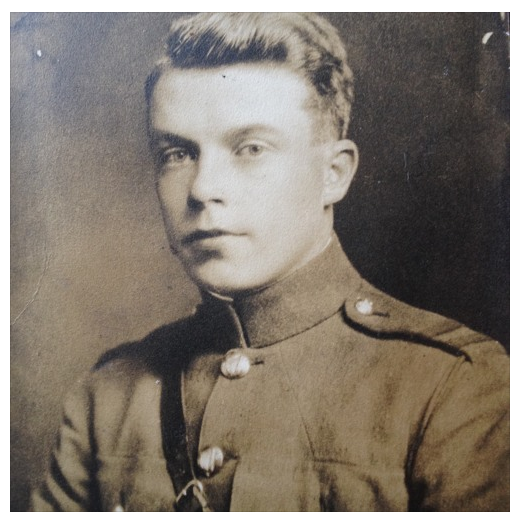 Another man to have a remarkable escape at the Burning, Michael Stephenson was a member of Dublin Brigade ASU.

Attempting to evade arrest at the Custom House to the East side (towards the North Wall quays down river) he was wounded and as a result fell into the Liffey. He would probably have drowned but for a quay coalman who pulled him from the water.

On 2 June, about a week after the Burning, Stephenson was captured in a raid by Auxy F Company, using 3 tenders of Auxy Cadets & an armoured car,  on the barracks used by centre city ASU men at 17 Great Strand Street (See BMHWS0127).

The Auxy report says he was found trying to throw away a coat containing a copy of An tÓglach. It also lists other interesting items found which the British took away. Note also the reference to Capt. King, a notorious senior figure in the dark forces of the Crown active in Dublin during the Tan War. Family lore says the Auxies found a Peter the Painter (Parabellum) automatic with 12 notches on it and credited Stephenson with those achievements. They were settling the score when the British Army arrived and saved him from a worse beating.

Michael was taken to the Guardroom in City Hall (then occupied by Crown forces), a very dangerous place where Dick McKee, Peadar Clancy & Conor Clune had been brutally murdered in custody on Bloody Sunday.

Remarkably there followed more paperwork about the loss of Michael’s coat than on the man or his arrest! While shooting “Shinners trying to escape” or under cover of darkness was condoned, apparently the Crown regarded loss of personal property as serious enough for investigation…

Stephenson, of 5 Grace Park Avenue, Drumcondra, was found guilty by a court martial of 3 offences under the Restoration of Order in Ireland Regulations (ROIR) & given 5 years penal servitude (with two remitted). He served time in Mountjoy Jail where the records describe him aged 23; married; 5 feet 7 inches in height; weight 10 and a half stone; with brown hair, blue eyes, a fresh complexion with two warts on his left cheek. He gave his occupation as Tailor. His wife Mary (née Dunne) was actually pregnant at the time and delivered a their first baby, a girl, in September while Michael was still in Kilmainham.

Michael Christopher was born at 33 Marlboro St, Dublin on 18 Dec 1898 to Matthew Stephenson, a Printer and Julia Ellen née Kearney. He was second of the five kids his parents had before his mother’s early death 1910. His father remarried but was dead by the time Michael was aged 21. Three years earlier, in August 1916, Michael was best man for his elder brother Jack at his wedding in St Michan’s (Catholic) Church, Dublin.

According to his family, Michael had been influenced to join the Volunteers after witnessing the Rising. He was possibly a volunteer with E Coy, 2nd Batt before becoming full-time with the ASU Number 3 Section.

After release from detention, he joined the National Army on its formation. Stephenson was with the troops taking over Beggars Bush Barracks from the British in early 1922.

He took part in the assault on the Four Courts in June and was reported as looking like a coal man or coal miner after the explosions and fire there (Thanks Diarmuid O’Connor). In the Army Census later that year his home address was shown as Serpentine Avenue, Ballsbridge, with his wife Mary Gabrielle (May) as next of kin.

He served as Lt. Comdt. and O/C 29th Batt. at Gough Barracks, The Curragh. He was transferred to Cork in 1927 and entered the Army Reserve in 1929.

The Stephenson couple and their young 4 daughters eventually settled in Kilbarrack on Dublin Bay’s Northside.

Michael died on 8 November 1938, a month before his 40th birthday, after a short illness. He had worked for the Irish National Assurance Company as an insurance inspector.

He is buried in St Fintan’s Cemetery, Sutton beside his widow May who never remarried. The lady died in Terenure at the great age of 98 in 1998 – incredibly exactly 60 years to the day after her husband.

(*See also: http://thecircular.org/where-were-your-ancestors-during-the-1916-easter-rising/ for a blog post including audio by his great granddaughter Zoe Fagan).