Edward Dorins: The bridge too far

Edward Christopher (aka Ed or Ned) Dorins had Lady Luck on his side at least twice in his short life.

Firstly, he survived his childhood while four of his siblings died as infants (and another aged 22 perished from TB in 1918).

Second time, he was extremely lucky to escape with his life after severe mistreatment by Dublin Castle Auxies during the night of 3 February 1921.

He’d been lifted in a raid on his house, driven around the city while being beaten and offered the choice of shooting or drowning. In the event, his callous captors flung him off the Liffey quays near Capel Street, then fired at him in the water. He floated from Grattan Bridge to Butt Bridge where he managed to haul himself out. Ed escaped, but spent time in hospital with pneumonia. That incident led to questions at the Westminster parliament as reported in the Freemans Journal and other Irish papers. 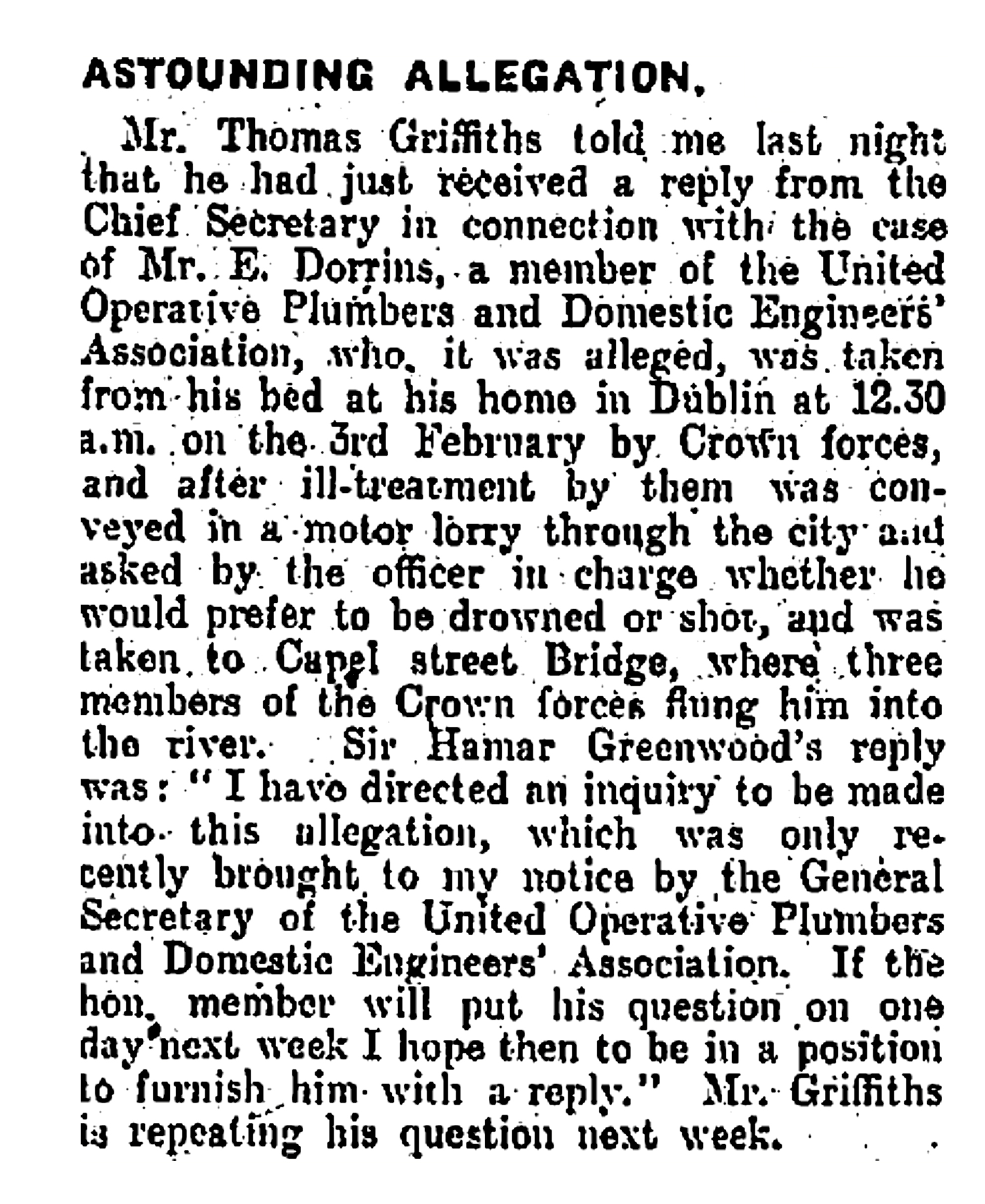 Greenwood never did give an explanation, only denials

Less than three months later his luck ran out. Aged just 23, Ed (nicknamed Tommy) met his death by Auxy bullets in the attack on the Custom House – close to Butt Bridge again.

A good piece on his family background and life, plus a better photo is at: https://en.wikipedia.org/wiki/Edward_Dorins

We also have a new article, written by Ed’s grandnephew John Dorins.

The military inquiry heard evidence of identification from his father Thomas (a Liffey river pilot) who found his body in KGV Military Hospital (now St. Bricin’s).

The medical report showed Ed was hit by two bullets, one through the back of his head, the second through his right thigh; and he had died at the scene.

A British soldier swore he found 6 rounds of ammunition in a jacket pocket on the body. The verdict was “Shot by Crown forces in the execution of their duty. Justifiable Homicide”.

He may have been part of the IRA covering party near the railway bridge, fairly close to Dan Head’s location and he may have been also shot down early in the battle. Alternatively he attempted to escape the surrounded building by running towards the quays.

It is said the body was moved by the British after the shooting was over and it appears almost like a war trophy in one photo on Beresford Place near Liberty Hall which includes a member of the Royal Army Medical Corp or Service Corp almost posing nearby. Some (including this writer) believe that picture does show Ed’s body; and in the second photo, his remains are being placed in an ambulance. 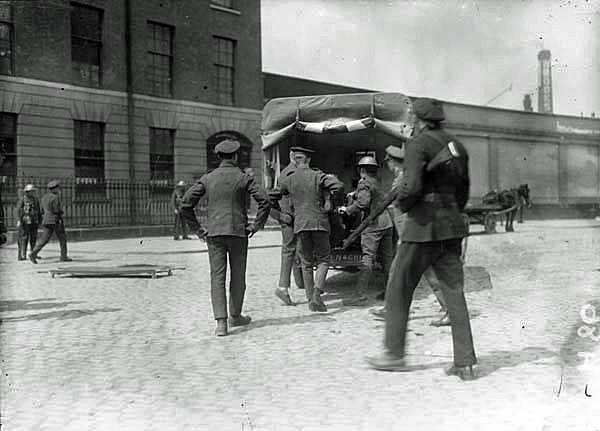 Military ambulance in use (Auxy with rifle is Waddingham, see post ‘Know your enemies!’) – NLI photos

After Funeral Mass at St Laurence O’Toole’s church, Ed Dorins was buried in Deangrange Cemetery on Saturday, 28 May.

Family notices to commemorate Ed’s memory appeared in Dublin papers for many years afterwards (This one, in the Freemans Journal was on his first anniversary).

His old comrades paid tribute that year as well. These words appeared in the notice inserted by the Officers and Men, E Company, 2nd Battalion, No. 1 Dublin Brigade, IRA:

Has fled from every furrow of Erin’s every vale

In 1924 his father Thomas was given a once-off payment of £65 for the loss of his son at the Burning of the Custom House. The poor man was devastated by Ed’s death. Not having any strong political beliefs, he considered his lad had made a tragic and needless sacrifice. On his own death in 1940, Mr. Dorins was interred alongside Edward. 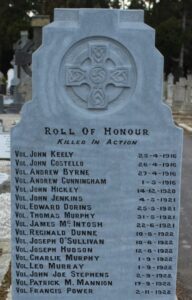 In 2016 Deansgrange Cemetery erected a stone inscribed with a Roll of Honour – Killed in Action. Edward’s name is listed among the Volunteers from the 1916-1923 period buried there.