The story of Ennis’s part in the Burning has been told very well many times by Liz Gillis and Mícheál Ó Doibhilín at the Custom House Burning Conference. What happened to him that day sounds like fiction, the stuff of legend. Some accounts may be a bit colourful and exaggerated. But all are based on fact.

Rather than repeat those known details again here, we will look at what the Custom House attack highlighted about the fighting man, Tom Ennis.

Managing to survive two serious gunshot wounds may be put down to pure luck or the fortunes of war. But his successful escape on one leg from a raging fire fight and recovery to resume active duty later – with the aid of a walking cane – show Tom’s toughness, guts and bravery. In 1923, he suffered another bullet wound to his injured leg, but again bounced back; and later became an excellent golfer. 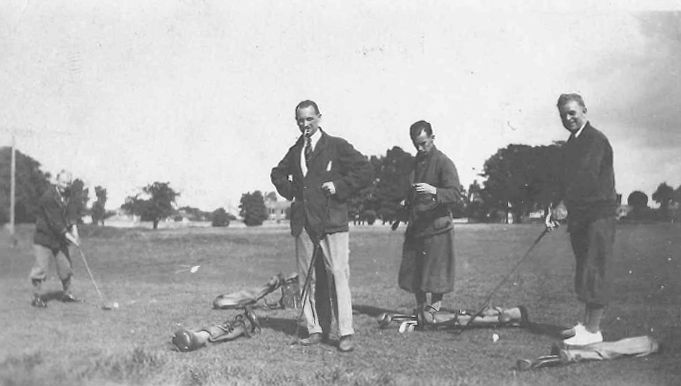 At just 5 ft 8 ins and under 10 stone, Ennis was no physical giant. Dave Neligan wrote admiringly in ‘The Spy in The Castle‘: “…He was a tiny fellow, built in inverse proportion to his courage. That day [25 May 1921] he was one of the last to leave the burning building. With two comrades, he peeped through a corrugated-iron gate. He saw serried rows of soldiers and Auxies lying prone with machine guns trained on the building. Armoured cars with Vickers guns ready to fire stood in the streets. …Behind their backs was a sea of flames…. Drawing their ‘Peter-the-Painter’ pistols, Ennis and his comrades flung the gate open and dashed into the middle of the cordon…..”. No doubt Ennis knew surrender would result in capture and execution, on the spot or after a court martial. Still, it showed great courage to attempt escape as he did.

Earlier in the attack, Ennis had demonstrated his coolness and command abilities by holding things together during confusion caused by a false evacuation signal before the fire had been properly set. This was recognised in a post operation review by Emmett Dalton who, as a decorated ex-WWI officer, knew the vital importance of such behaviour.

It was typical of the active leadership Ennis had displayed as Commandant of the 2nd Battalion, Dublin Brigade in the Tan War. From 1916 on he won a prominent record in major operations by E Coy and for GHQ. That meant his demand for his renowned “Fighting 2nd” to play the lead role in the Custom House attack was granted and saw him placed in command inside the building. His Brigade O/C Oscar Traynor acknowledged many times the unrivalled effectiveness and level of Tan War activity by Ennis’s 2nd Battalion. Even the unswerving Republican Ernie O’Malley called Ennis “the best officer in Dublin” in an article in ‘Dublin’s Fighting Story‘.

Of course in the sporting arena, Tom had captained his GAA club team and in the IRA he was elected 2nd Battalion O/C. Later in life he helped found and then captained Elm Park Golf Club. He is fondly recalled there as the man who extended the course and ensured the club’s survival. He clearly earned the respect and loyalty of his colleagues in many areas of life.

The Tom Ennis Memorial Trophy. Commissioned after his death in 1945 and competed for every year since (courtesy of Rory Spain, Elm Park GC)

In 1922 the majority of his 2nd Battalion followed his lead in supporting the Treaty while all other Dublin Battalions overwhelmingly opposed it. His nickname ‘The Manager’ may have come from the docks where he worked and where everyone had a ‘handle’ or alternative name. But his suggests respect, unlike those given to many others, some of which were more humdrum, jokey or even a bit cruel at times!

His comrades’ loyalty was returned by Ennis. While in great pain and awaiting major surgery in Geraldine O’Donel’s Nursing Home after the Custom House battle, he is quoted by Bill Stapleton as asking “Did the Lads manage to get away, Bill?”. He wasn’t moping about the chances of his own survival, or keeping his ravaged leg or the end of his GAA career. He worried about the fate of his men. His popularity and key role in the Dublin Brigade was also evident through the reported high number of visitors he had while recuperating.

During those 3 months he made a strong impression on Nurse O’Donel and the surgeon who operated on him, Charles J McAuley. Many decades later (and despite going anti-Treaty), both had very fond memories of Ennis. O’Donel, a highly experienced nurse, called Tom’s recovery “remarkable” and recalled him as the most senior IRA man she accommodated in her nursing home. McAuley wrote of the indomitable spirit of Ennis. When told of British prime minister Lloyd George’s threat to contain the IRA with barbed wire all over Ireland, Tom declared “And while he’s busy at that, what does he think we’ll be doing?”.

Ennis was clearly a strong personality. John Borgonovo (in ‘The Battle for Cork‘) calls him “an intelligent and charismatic leader”. Several of his 2nd Battalion comrades cited his decision to support the Treaty as the main or only reason they and their unit did so themselves. His insistence the Custom House be his unit’s job and Dublin Brigade’s agreement showed how well he could state a case to higher authority. His daughter, Nuala MacDonald, says that her father was not well educated, yet he mixed comfortably with all levels in the Army as well as with politicians. Notably he became friends with Emmet Dalton – with a more privileged upbringing and higher academic qualifications – commissioned as an “officer and gentleman” into the class-based BA. 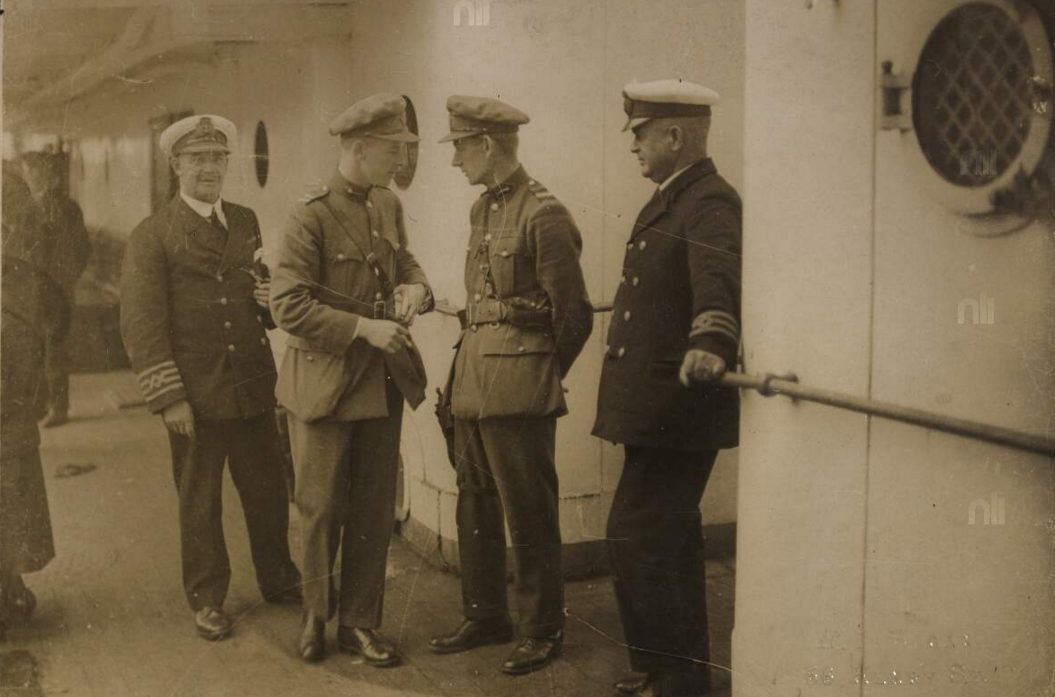 Generals Dalton and Ennis confer on the SS Arvonia to Cork, Aug 1922 (National Library of Ireland)

In his excellent ‘A City in Civil War‘, Padraig Yeates conveys a disparaging view of Ennis’s rise to Major General in the National Army, suggesting the vacuum left by more senior pre-Truce Dublin IRA going anti-Treaty resulted in little competition. Mr Yeates also categorises Tom as one of the ‘Collins cabal of street gunmen’, in a dismissive way. Yet what better type of man would you want on your side when backed against a wall by superior numbers, as the fledgling Free State was? How many others had the actual hands-on field command experience of Ennis? And, when trusted to clear the Four Courts, Ennis did not let the Provisional Government down. 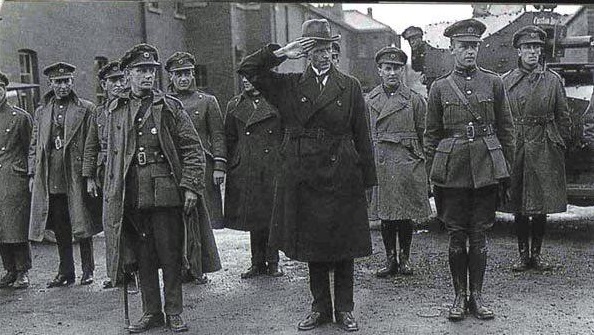 Nor did he pop up from nowhere; he’d earned steady promotion through the Tan War and during the Truce. Yes, he came from an ordinary and humble background, but in the Battle for Dublin and his other Civil War campaigns he proved more than a match for vaunted former superiors like Traynor, O’Malley and others. Ennis led from the front and adapted well to organised military tactics – maximising advantages from artillery, heavy weaponry and armoured cars – way beyond the scale of the guerrilla ambushes and hit jobs he’d carried out early in the Tan War. Several Free State general officers with formal British or US military training and combat experience proved incapable of achieving fast results with minimal casualties on either side, like Ennis did. In The Battle for Cork, John Borgonovo highlights this and adds “Among former Dublin street fighters, Ennis enjoyed perhaps the smoothest transition to conventional army officer“.

Another notable aspect of Tom’s military career is the absence of any association with atrocities. On the contrary, he demonstrated humanity in his treatment of Civil War IRA prisoners (senior and junior) and none were executed in his command area in Munster. He also, with Dalton, made peace overtures to anti-Treaty leaders in the south. After the Civil War, he helped out several old comrades who’d opposed him in 1922/23. 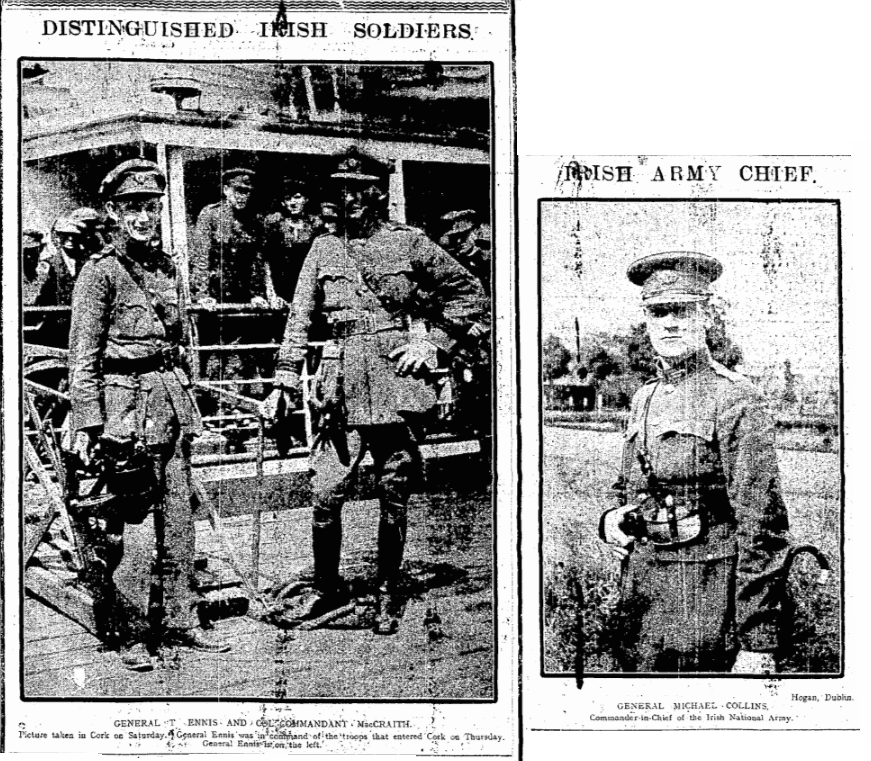 As the saying goes (or should go) “Beside every great man stands a great woman”. In Tom Ennis’s case this was certainly true of his wife, Kathleen. Oscar Traynor recalled her great bravery and coolness as she helped with first aid after her husband had staggered in the door severely wounded while she was nursing their 2 month-old daughter. Later in life the Ennis couple continued to show their patriotism in war and courage during peacetime travails. We’ll tell of that, along with the fall from grace of Maj Gen Ennis, in a future instalment. 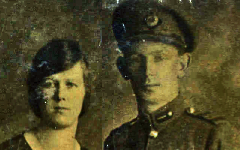 Tom Ennis and his 2nd Battalion’s exploits in the Tan War would be recognised by his comrades within the National Army. Three Rolls Royce armoured cars were named ‘The Manager’, ‘The Customs House’ and ‘The Fighting 2nd’ – all of which were prominent in Civil War action. Even though a very modest man with no pretensions, maybe he allowed himself a smile and a bit of pride at the sight of those nameplates? 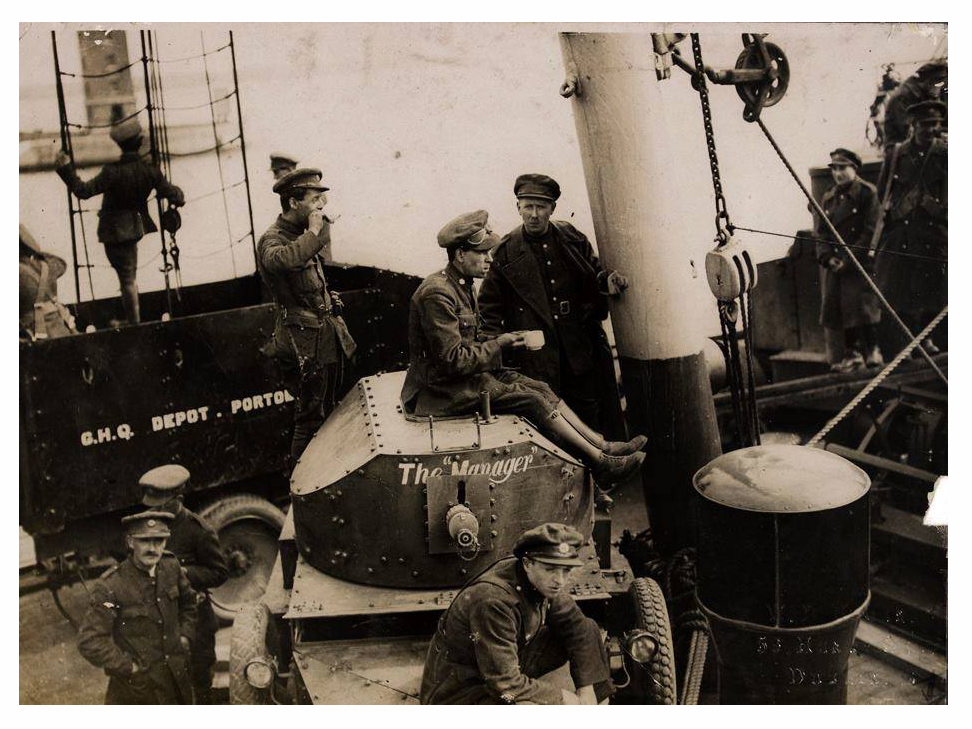 In this writer’s opinion those gestures were well-earned & heartfelt tributes by his men to one of our great Irish soldiers. Now sadly overlooked, Maj Gen Tom Ennis – with his pre-Truce 2nd Battalion comrades – surely deserves credit as a key mover and shaker in the foundation of the State and its Defence Forces.