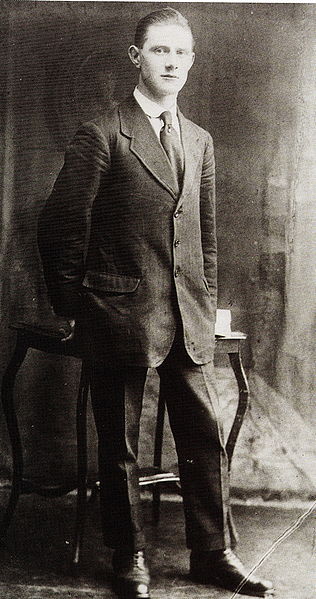 Vinny Byrne was one of the most active and deadly members of the Dublin Brigade. He was out from the age of 14 and involved in practically all major operations. He first became active during the Easter Rising. In his statement to the Bureau of Military History he includes the following: “On Easter Monday I met Lieutenant James Shields who asked me where I was going. I told him I was going on Parade and that I was mobilised for Stephens Green. He told me I had better go home. I started to cry because I was being sent home. I met section commander Mick Colgan on my way down Grafton St and he ask me what was wrong with me. I told him what Lt. Shields had said to me. He told me not to mind him”. Vinny went to Jacobs and took part in the Rising. He was encouraged to escape arrest at the Surrender and got away from Jacobs but his house was raided about a week later. He was arrested and held but was released after a short period of detention. One of the DMP men who questioned him was Johnny Barton. He was later shot dead by the Squad in 1919.

Vinny states the first Squad was really unofficial. He was made part of that unit in November 1919. He related he was in Mick McDonnell’s house & also present were Tom Kehoe and Jimmy Slattery. At the meeting there was a discussion about shooting Detective Johnny Barton. Vinny said he was be happy to help out as Barton was the man that raided his home. Slattery and Vinny worked together and had arranged to meet Mick McDonnell and Tom Kehoe at College Green. Slattery and Vinny walked up Grafton St when they spotted Barton. They followed him for a short period but temporally lost him. When they spotted him again Paddy O’Daly, Joe Leonard and Ben Barrett had joined the hunt. Barton was shot and fell to the ground shouting ”Oh, God what did I do to deserve this?” Vinny never revealed who fired the fatal shot.

He played a full part in the many operations carried out by the Squad for the rest of the war. 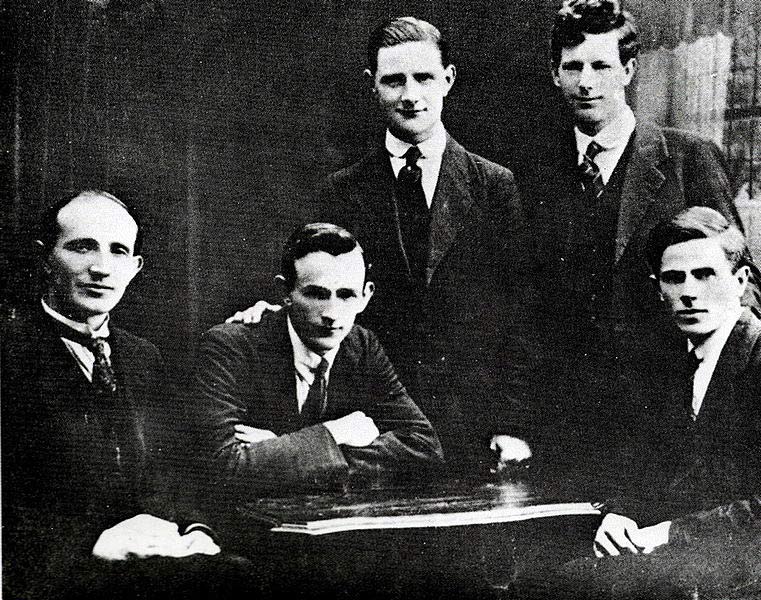 Vinny was immortalised in the Michael Collins film and a quick search for him on YouTube will introduce you to this legend of Ireland’s fight for freedom. In the clip Commandant Byrne describes in great detail his role in the execution of two British officers.

The main focus here is on his role at the burning of the Custom House and a small piece about his resignation from the Free State Army after the 1924 Mutiny.

In his statement to the Bureau of Military History he outlined in great detail his role the day they burned the Custom House:

“The Squad had a sort of roving commission that day. I entered the building along with Tom Kehoe and Jimmy Slattery. As we entered the hall, we met Tom Ennis who said he was short of a couple of men. He asked Tom would he mind ‘if I took Vincent to burn some of the offices on the second floor?’ Kehoe gave the OK. I got a tin of petrol and proceeded to the second floor. I opened the office door and sitting inside were a lady and gentleman, having tea. I requested them to leave stating I was going to set fire to the office. The gentleman stood up and said ‘oh you can’t do that’. I showed him my gun and told him I was serious. He got very worried about the whole thing. I said to him ‘you had better get out at once unless you want to be burned alive.’ The lady then asked me could she get her coat and I replied ‘Miss, you’ll be lucky if you get out with your life.’ They then left”.

Vinny removed the ledgers and placed them on the table then proceeded to pour the petrol (actually paraffin) all over the office and papers. On hearing the signal, he “lit a ball of paper and slightly opening the door flung it into the office; the place was soon ablaze.”

When he made his way out Vinny saw the Auxies on the Quay, so made his way back into the hall. He decided to make a dash for it but the Auxies appeared at the door. He opened fire and ducked back. Having got back to the hall, the next thing he saw was a whippet armoured car. It fired a burst into the hall and Vinny flung himself down on the floor. He was protected by some sandbags that were lying around. After a few more near misses, Vinny thought that his time was up. As he had no bullets left, he walked out and as he came to the door he heard a shout “Hands up!”. He raised his hands and found himself covered by an Auxy with a rifle who shouted at him “Come over here!” He was struck in the face with the rifle and ordered to walk in front of the officer. They met another Auxy and Byrne was again struck a few more times. He was asked what was he doing in the building he said he was on a message for his boss.

The two Auxies left him to approach the body of a dead civilian. Vinny claims they lifted the man by the hair, searched his pockets and let his body fall to the ground. Vinny could see the captured Squad men and members of the 2nd Battalion standing under the middle arch (of the Loopline Bridge). He said he made sure he did not show any sign of knowing them for as to do so would have led to his capture. He slowly edged his way over to a group of civilians who were standing close by. An Auxy officer was also standing near them. Vinny smartly reckoned his hands must smell of paraffin, so took a few cigarettes from his pocket, crushed them and rubbed the loose tobacco to hide the smell.

When he approached the officer he asked was he able to leave. The Auxy glared at Byrne and asked what he was doing there. Vinny replied he was on his way to buy some timber for his boss. The officer searched him and discovered a carpenter’s rule and a few bits of paper with different measurements. This convinced him and Vinny was allowed go. Once again Vinny Byrne had luck or God on his side.

Vinny remained active until the Truce and he joined the new Dublin Guard but after the Civil War he, along with many of the Squad and ASU members who fought for the Free State, resigned after the Mutiny. 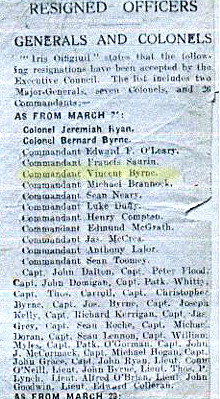 Vinny resigns after the mutiny

Vinny remained a committed republican and was involved in many old comrade groups and attended numerous events to commemorate the various actions during the War of Independence.

I came across this profile from a grand nephew of Vinny’s which gives an insight to his life after the wars were over. I highlight the work that he embarked on to try to heal the wounds of the Civil War.

“I am a great nephew of Vinny Byrne. My grandmother was his sister. I have seen many interviews over the years with Vinny. Even to this day he still comes up on RTE now and again. He lived in 1 Anne’s Lane, off Grafton Street during the War of Independence. The house is still there today but is now a restaurant. He resigned his commission in 1924 after the Army Mutiny. He later worked in the P&T (Posts & Telegraphs). He lived most his life in Drimnagh, where he become a founding member of the local Credit Union. He married a second time after being widowed. He had a son and 2 daughters by his first wife, who all moved, funny enough to England. One still survives and lives just outside Merseyside. She is in her 80’s now. He later moved to Artane where I live myself, just up the road from him. He died in 1992 at the great age of 92. It took him many years to talk to the family about what he was involved with. In a meeting of the 16-21 Club, which was made up of members of the Old IRA, the surviving members of the Squad took a vote to see who would do it all again if they had to. Vinny was the only one who said yes. He was that much of a hard liner. He became the chairman of the 16-21 Club. I hope this gives you some insight into Vinny.” 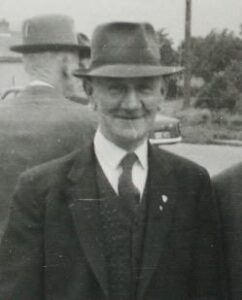 The 1916-1921 Club was founded in the 1940s in an effort to heal the divisions of the Civil War. Leaders on both sides were invited to join. The Association of the Old Dublin Brigade Óglaigh na hÉireann was open to surviving members of the War of Independence. The Club incorporated the Association in the early 1980s as their membership declined. Membership of the Club is open to all Irish citizens who subscribe to the objectives and accept the documents upon which it bases its charter. 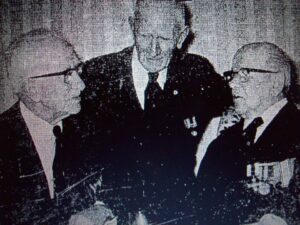 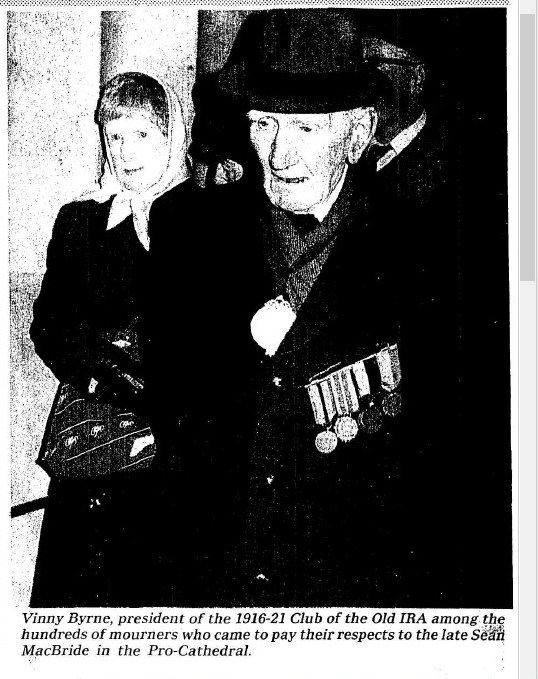 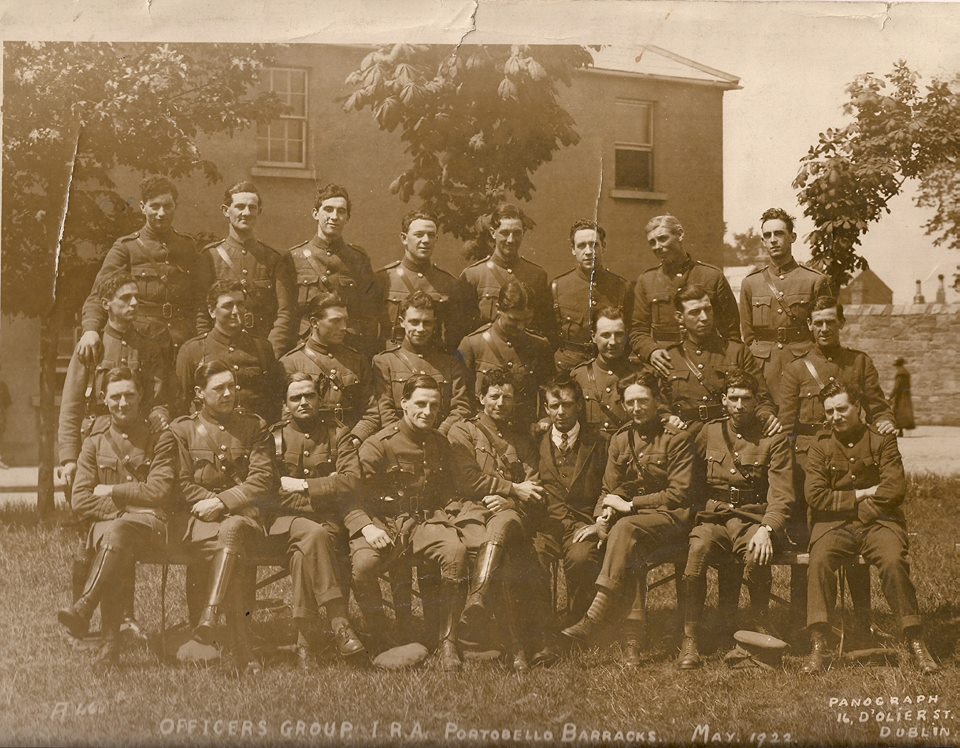