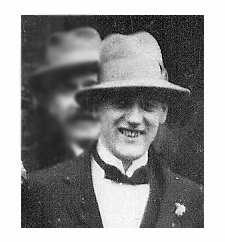 Having survived combat in the Tan War, 6 months in Kilmainham Gaol under British military rule and then Civil War, Dan met a tragic end in a drowning accident. He seems to have led an action-packed life in his 31 years.

Daniel Joseph Finlayson was born on 28 December 1899 in Fitzwilliam Square, Wicklow Town. His father Andrew Duncan Finlayson (1859-1925) was a House Painter originally from Glasgow; his mam Philomena née Molloy (1859-1933) was a Tullamore woman. Dan had 5 sisters and 5 brothers and all except the last little lad (Ignatius, the baby in photo below) survived. 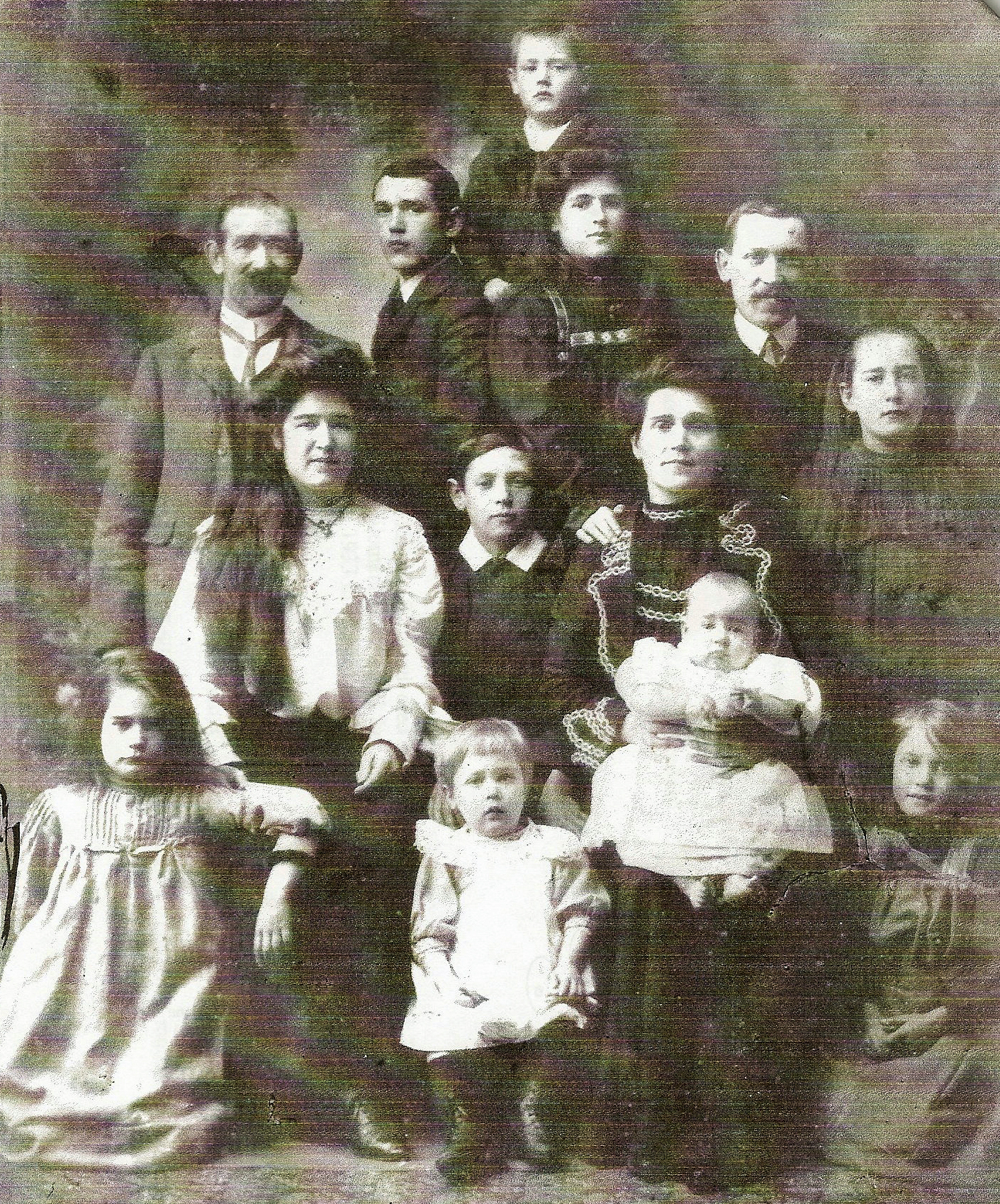 The family is recorded in Wicklow Town in both censuses. By 1913, they had moved to Dublin and occupied a “shop and parlour” at 161 Parnell Street. The Finlaysons later lived at Northbrook Terrace, Ballybough and Dan followed his father into the house painting trade.

According to Capt. Michael Kelly, Finlayson was a member of Volunteer B Coy, 2nd Batt., Dublin Brigade from early 1918. He was subsequently an NCO attached to K Coy of 3rd Batt. and was involved in the killings of British intelligence agent MacLean and his brother-in-law Caldow at Morehampton Road on Bloody Sunday 1920.

Dan Finlayson switched to 2nd Batt under Tom Kilcoyne and participated in their attacks on Crown forces at Drumcondra, Whitehall, Killester Bridge and a raid on Westland Row Railway Station. Other actions he took part in: 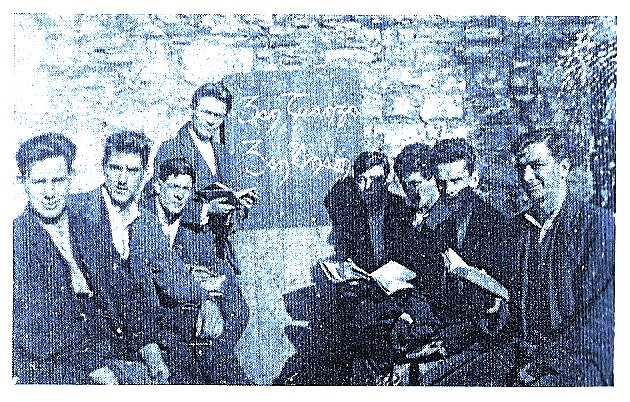 “Dan, 2nd from left, at an Irish language class with Custom House comrades in Kilmainham Gaol, 1921” – posted on ancestry by member trishedst (The blackboard says Gan Teanga Gan Anam – translation – Without your native tongue, you have no soul).

This photo from a family tree on ancestry.co.uk created by a relative of the Finlaysons. We are not certain about the identification of Dan in this particular picture and believe the man 2nd left is actually Cyril Daly. We are a bit more convinced about him the photo below. However there is little doubt both photos were taken in Kilmainham, 1921. 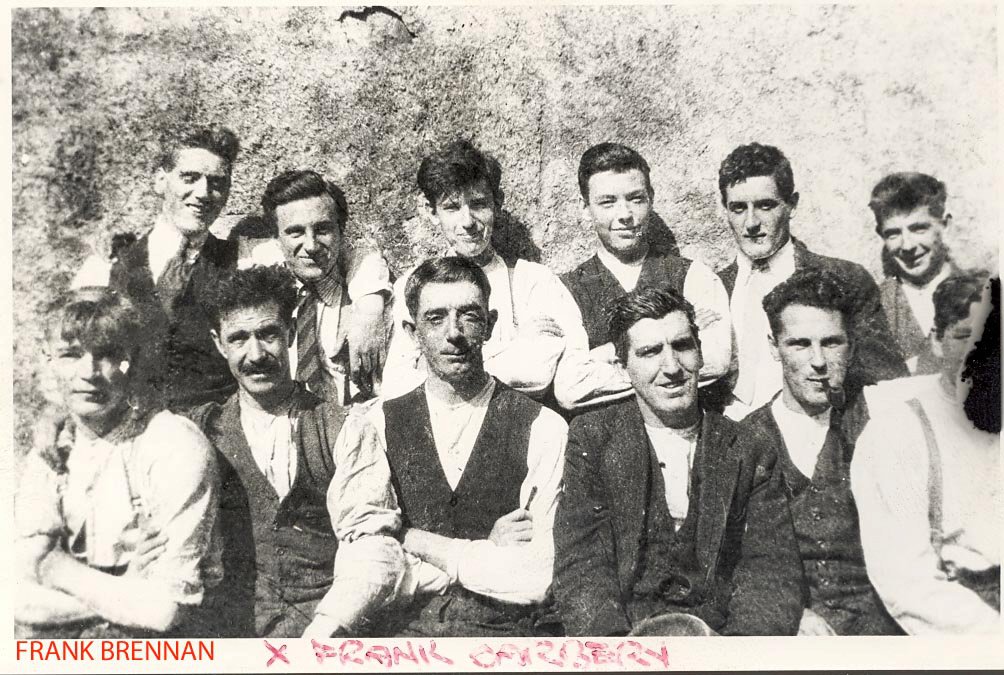 After Dan’s release in December 1921 he was involved in Irish Republican Police activity before joining the CID at Oriel House. In July 1922 following the outbreak of the Civil War, Finlayson was transferred to the National Army serving with the Dublin Guard Intelligence Section in Co Kerry (under Chief Superintendent Dave Neligan). He appears on the GHQ Intelligence pay sheet for the week ending 25 August 1922. Dan became a Captain in the Special Infantry Corps before his demobilisation on 11 December 1923.

In Dan’s military pension file all his referees say he was a very reliable and active Volunteer and mention that he’d been recommended for the ASU. He was awarded 7 years service and an annual pension of £70.

On 7 February 1923 he was best man at the wedding of his sister Rita at St Laurence O’Toole Church in Dublin’s docklands. 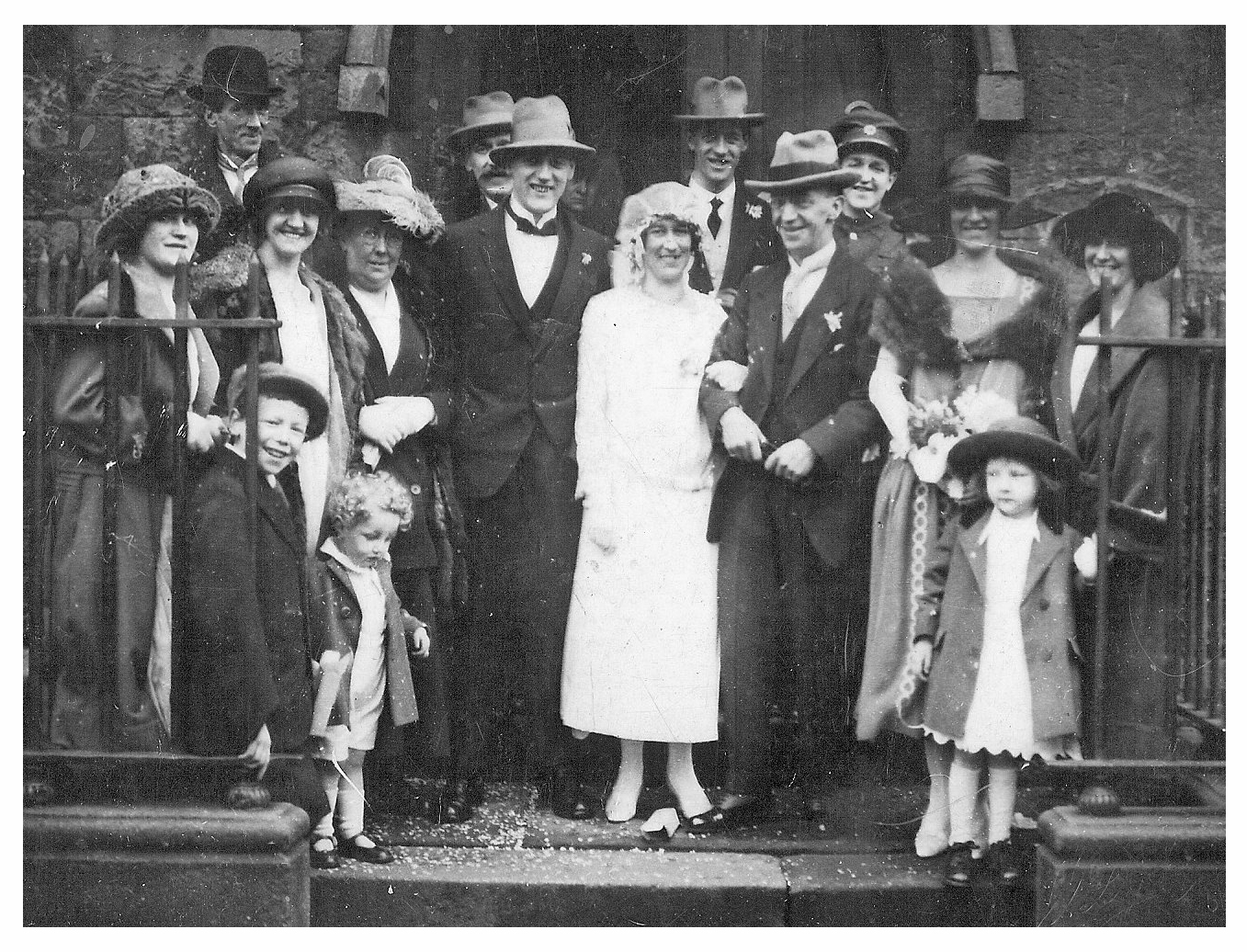 Finlayson-Cumberton wedding, March 1923.
Dan is immediately to the left of his sis Margaret (Rita) the bride.
His brother Frank, at back to the right, wears National Army uniform (courtesy of ancestry member trishedst).

He was back in the same church on 27 June for another sister’s marriage when Bridget (known as Beatrice) wed Capt. Willie Fagan, National Army. Fagan had been an active Volunteer arrested and jailed in late 1920 and drove one of the tenders carrying wreaths in Michael Collins’ funeral procession.

Dan Finlayson joined the new civil police force, An Garda Síochána, in March 1924 and served as a detective officer in Pearse Street Station, Dublin until his resignation in February 1929.

That April he emigrated to the USA, following an older brother James already over there and went to live on West 23rd St, New York City. He visited Ireland on holidays the following year before returning to The Big Apple in July 1930.

SS Leviathan, the ship which took Dan to the USA in 1929

But a year later Dan was dead, drowned in an accident while swimming at the Atlantic Beach resort off Long Island, New York on 12 July 1931. According to local papers, Dan was one of many dragged to a watery grave that weekend by a vicious tidal undertow from the beaches in the area. It was a sad irony that he had been a strong swimmer who loved to go for a dip every day, according to his grandnephew Duncan.

But at least his body was recovered and was identified by  his brother James of Brooklyn. Dan, who was unmarried, was buried on 15 July in St. John Cemetery, Queen’s, New York City, USA. 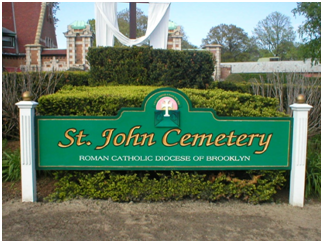 Nearer home, his parents and many of his relatives are buried at Rathnew Cemetery, Co Wicklow – Grave number 1218.

The writer is pleased to acknowledge photos and hints from ancestry member “trishedst” which greatly expanded the above article.