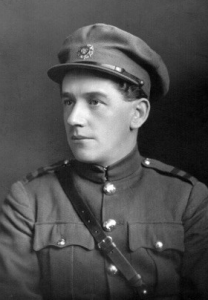 Imprisoned twice, a widower twice, a failed election candidate and dead at 52 – Michael Love’s life sounds kind of sad from an outsider’s viewpoint.

Buried with full military honours in Glasnevin in late 1948, Michael’s passing attracted brief press coverage. Yet in those times when Civil War cast a long shadow, in addition to the ‘pro-Treaty’ Irish Independent’s report Dev’s Irish Press also carried an obituary for a 1916 man who later took the Free State side and also stood as a Fine Gael candidate in a general election.

The Press listed some of Michael’s surviving relatives, including a brother named Reggie and cousins Conway & Romuald McGinn. If those unusual names lead you to think Michael was not a Dublin lad, you are spot on.

He was actually from Co Fermanagh which again reminds us that men and women from many parts played an active role in the Dublin Brigade’s conflict with the British.

The area where Michael grew up. His birthplace is on the road between Enniskillen and Drumlyon.

Michael was the youngest of twins born on 20 December 1895 at The Brooke, Enniskillen to Joseph Love, a Carter and Rose Anne née Gilmartin. He arrived 30 minutes after his sister Mary, who sadly died as an infant in 1898. Yet that was not the first tragedy in the young lad’s life – his mam had passed away the previous year at the early age of 31.

In 1901, Michael and his younger sister Katie were living with their widower father in their grannie’s house in Drumlyon. Within sight was ruined Portora Castle, a lasting reminder of the Ulster Plantation, on the shore of Lough Erne near Enniskillen. 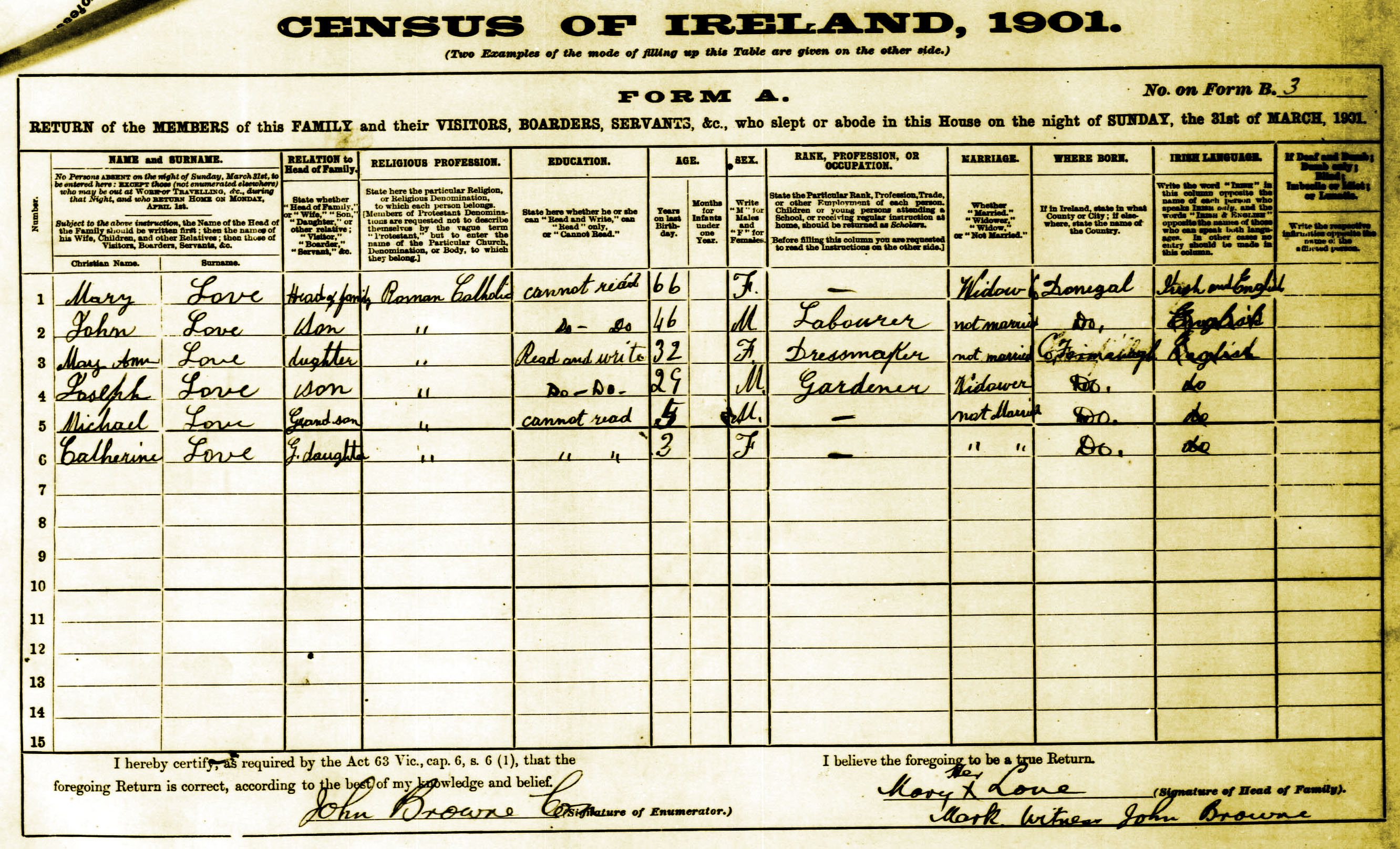 The two kids remained there after their dad remarried in 1902 and moved to Enniskillen to begin another larger family with his second wife. Ten years later Michael, still at his grandmother’s, was recorded as a 16 year-old Coach Builder.

He moved to Dublin at 18 and got a job as a checker with a shipping line in Dublin Port. An uncle by marriage was an old Fenian and in 1914 (or 1913) Michael himself joined the Volunteers, F Coy, 2nd Battalion, Dublin Brigade and was also sworn into the IRB. During Easter Week 1916 he was a member of the Jacob’s Garrison. Love being a kid was allowed to go home by his Commandant so did not have to join in the Surrender and stayed free to help re-organise F Coy as a Section Commander during 1917. His wider family, the McGinns and Murtaghs, were also actively involved in the revolutionary period; his cousin Michael Conway McGinn fought in 1916 with F Coy at the GPO (see Roll of Honour) and Rommy McGinn was also active.*

Michael Love worked for Dublin Corporation at Clontarf Town Hall as a Night Watchman or Storeman (He seems to have succeeded his uncle Michael McGinn who had been Caretaker there until his death shortly after the Rising). Love married a dressmaker Elizabeth ‘Cissie’ Murtagh from Cecil Avenue, off Malahide Road, Clontarf at Fairview Church in June 1918. He was later Storeman in charge of the Corporation Depot at Annesley Bridge sloblands.

With the Volunteers and IRA

With the Volunteers Michael acted as an escort for Sinn Féin candidates at election rallies in Co Armagh in 1918. He went on to take part in many major F Coy operations – surveillance on Det Sgt Smyth, targeted for assassination by The Squad in mid-1919; incendiary attacks on Income Tax offices; searches and raids on houses and ships for arms; an ambush at Newcomen Bridge; and the Bloody Sunday attack at Baggot Street (with Jim Conroy, Frank Saurin and – he says – Charlie Dalton) on 21 November 1920.

Three days later he was lifted during a night-time raid on his home in 10 Bessborough Avenue, North Strand. The house was often used as an IRA assembly place and Love is included on a British military list (undated, but in that timescale) of men from that street to be detained – some other familiar names are also shown. There were widespread raids and searches in the days following Bloody Sunday with hundreds of arrests.

Extract from list of men to be arrested after Bloody Sunday

Paddy O’Daly gives a detailed account of the arrests and aftermath in BMH WS0387. At the time of the raid, O’Daly was as good as living at the Loves’ house because the family was minding one of his 4 small kids since his wife’s death (At that time, Love’s own wife was in poor health herself). Love and O’Daly seemed to have been close enough. They were at one stage married to sisters: Michael’s 1st wife and O’Daly’s 2nd wife were Murtaghs from Clontarf (Coincidentally, each man married 3 times). Both ended up arrested that night and with many other IRA members, supporters and suspects were interned in Ballykinlar No. 2 Camp for several months.

At the time, if an internee signed a a written undertaking not to associate with or belong to any illegal organisation, they would be freed. The IRA could use the system to its advantage. The regulation from GHQ was for Volunteers to ignore such offers. But exceptions were made in individual cases where a man was more valuable out than in. This was applied for O’Daly and Love.

Released on 17 May 1921 having signed ‘the undertaking’, Michael did not get to enjoy his liberty for long. A week later he was a participant in the Custom House Burning after which he was again arrested to become one of those detained in Kilmainham Gaol. He features in a British Truce Violation report dated 2 December 1921 for breaking parole (along with “R. Rigney” – possibly Tom Rigney, another Custom House man?) on 20 November.

British listing of breach of parole by Michael Love & comrade who both returned to Kilmainham the following day – on IRA orders.

That incident did not affect either man’s case, as Love & Rigney were released with the other prisoners on 8 December. 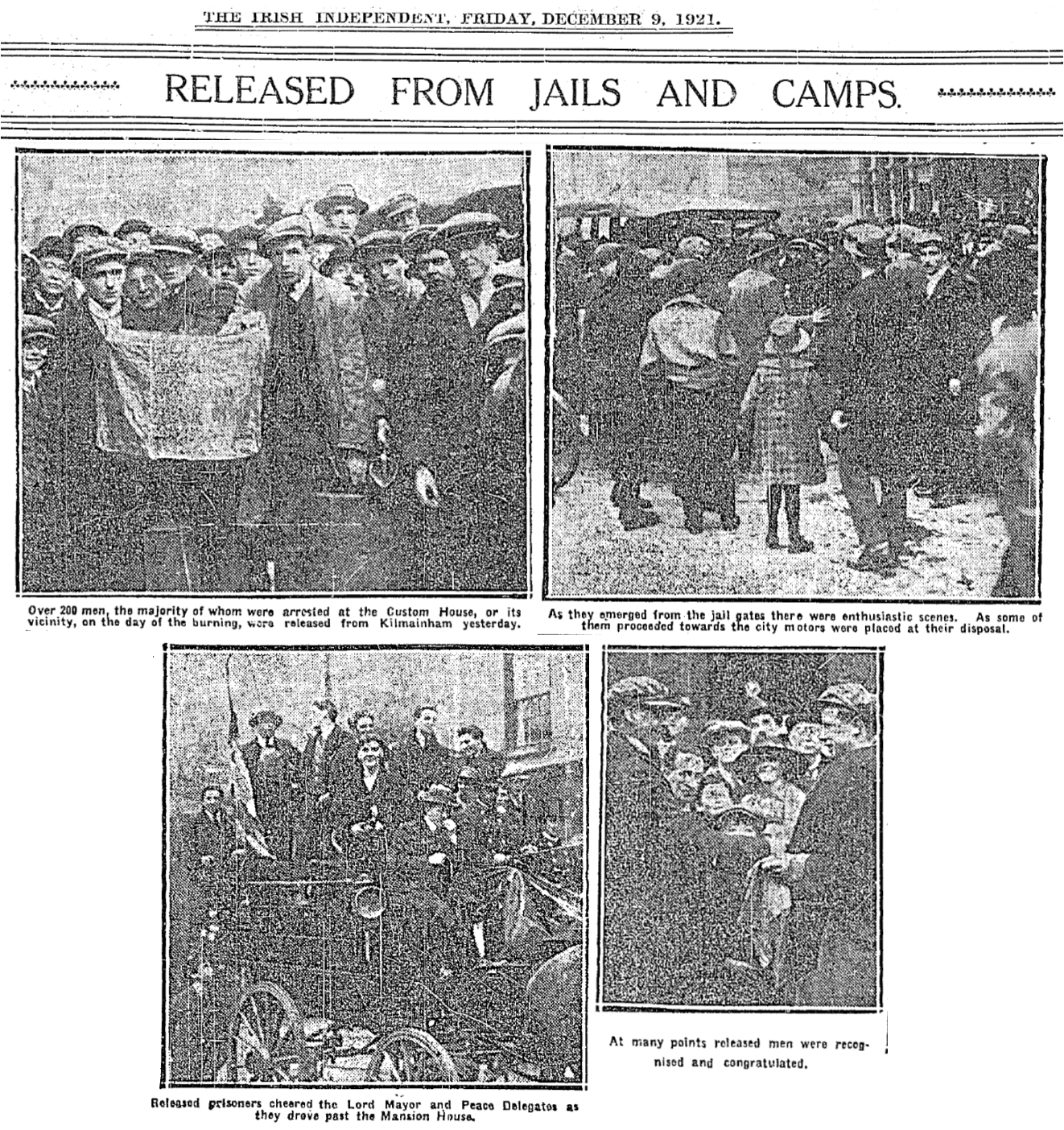 Having spent most of the War of Independence in jail, Love joined the National Army at Beggar’s Bush in March 1922 and became a Private in the new Dublin Guard. Subsequently posted to Portobello Barracks, he was commissioned as a Captain. The Army Census that November lists him at the Mountjoy military post in the Quartermaster’s Department, 2nd Eastern Division, aged 26 and living at 5 Cecil Avenue, Clontarf. He then was promoted to Commandant, but on 28 December tragedy hit Love again with the death of his wife in a nursing home from general paralysis at the very early age of 34.

He remained in the Army following the end of the Civil War which he survived unscathed and married for a second time in July 1924, to Mary ‘Maisie’ Donnelly, a teenager from Finglas Road, Glasnevin. At that time he was based at Hare Park, Curragh Camp carrying out military police duties.

Commandant Love resigned from the Army on 30 March 1927. He was aged 31 and was described on an Army form as 5 foot 5 inches tall.

Michael received a military pension based on 11 years service and was also awarded the Tan War medal.

He may have worked for a time as a Dairyman on the Curragh before becoming a Clerk in the early 1930’s and moving to Finglas Road, Glasnevin.  It was there that Michael suffered the loss of his second wife in June 1932 – TB killed 25 year-old Maisie Love.

Twice-widower Michael tied the knot for the final time in October 1935 with Mary Fullam (née McCabe) a widow who lived two doors away. Their marriage would last 13 years and, this time, the bride would outlive the groom.

During The Emergency, Love rejoined the Defence Forces as a Lieutenant, later Captain, from 1940-43, while living at Fairfield Road, Glasnevin.

In the 1943 General Election Captain Michael Love (Fine Gael) stood in Dublin North West constituency after resigning from the Army (again). Of the 15 candidates he polled the lowest number of first preferences – even fewer than the fascist candidate, Ailtirí na hAiséirghe party leader – and was eliminated after the first count (Fellow 1916 & FG man Michael Staines did almost as badly; while GPO veteran and future President Sean T. O’Kelly T.D. of Fianna Fáil topped the poll with one- and-a-half quotas).

Michael Love made his final change of address to 89 Dorset Street in the North Inner City towards the end of WW2.

There, suffering from cancer, he died from heart failure on 14 December 1948 just short of his 53rd birthday. His occupation was given as Manufacturer.

This particular Custom House Fireman undoubtedly suffered many tragedies in his short life. It was remarkably sad to lose very close family and two wives so young. He was unfortunate and unlucky to be jailed twice and miss a full year of the Tan War. But none of that stopped Michael Love carrying on and giving many years in the service of his country. It would be quite understandable (to the writer) if he had given up, suffered from despair or taken to drink. But he kept going despite all his hard knocks, seems to have tried to do his best and never let himself down.

Given the trail of tears and misfortune in Michael’s life, it may come as no surprise that in death he rests alone in Glasnevin’s St. Patrick’s Section.

Here is a picture from his final resting place (plot TJ73, St Patrick’s). The small plaque is obviously of very recent origin. However at last the man’s life, death and military service for Ireland have now been appropriately honoured.

Michael’s plaque shows he joined the Volunteers in 1913, while in his Military Pension application he said 1914…. He was an early joiner in any event.

PS – After researching Michael’s life from scratch and putting above together, the writer stumbled across an excellent online article by his niece, Eilis Nic Ionmhain. Thankfully most details proved correct and I only stole the photo and the fact he joined the IRB. Honest! Elizabeth’s story of her uncle Mick is well worth a read –  https://www.1916relatives.com/single-post/2015/08/09/Spotlight-on-history-My-uncle-Michael-Love

* For anyone interested in more information on the McGinns and Michael Love’s early Volunteer associations, have a look at: http://www.dublincity.ie/story/clontarf-town-hall-caretaker-and-rising