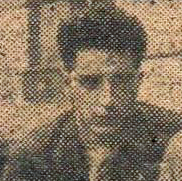 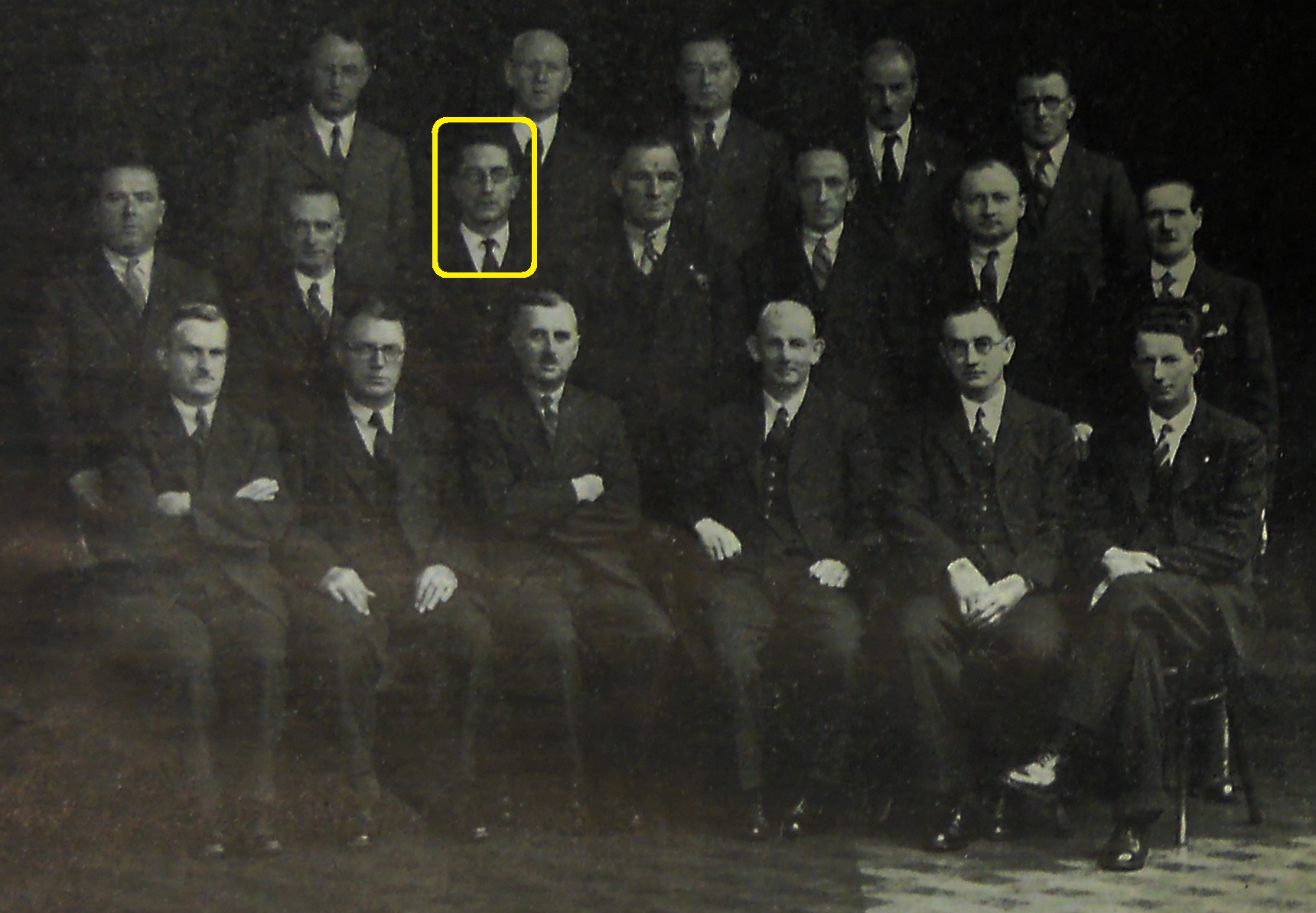 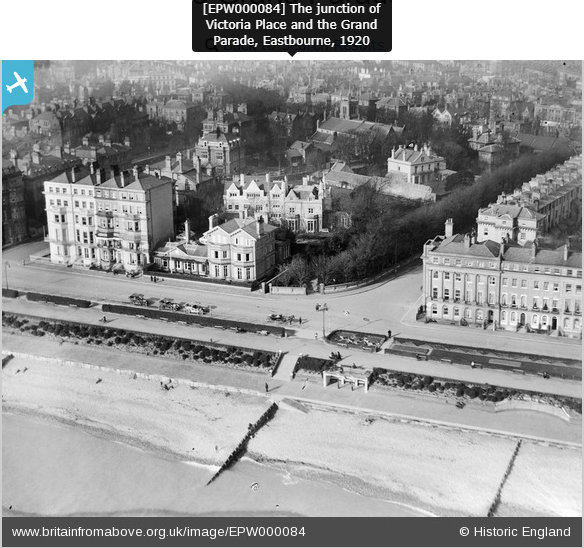 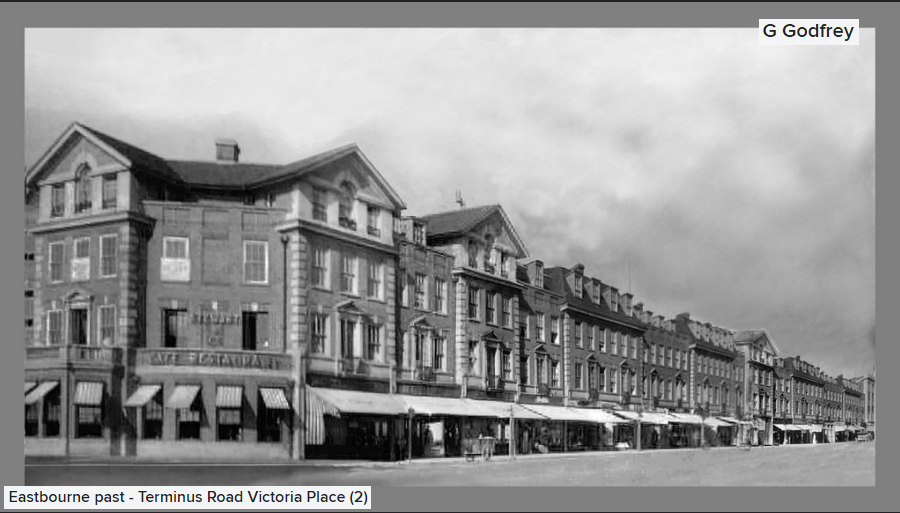 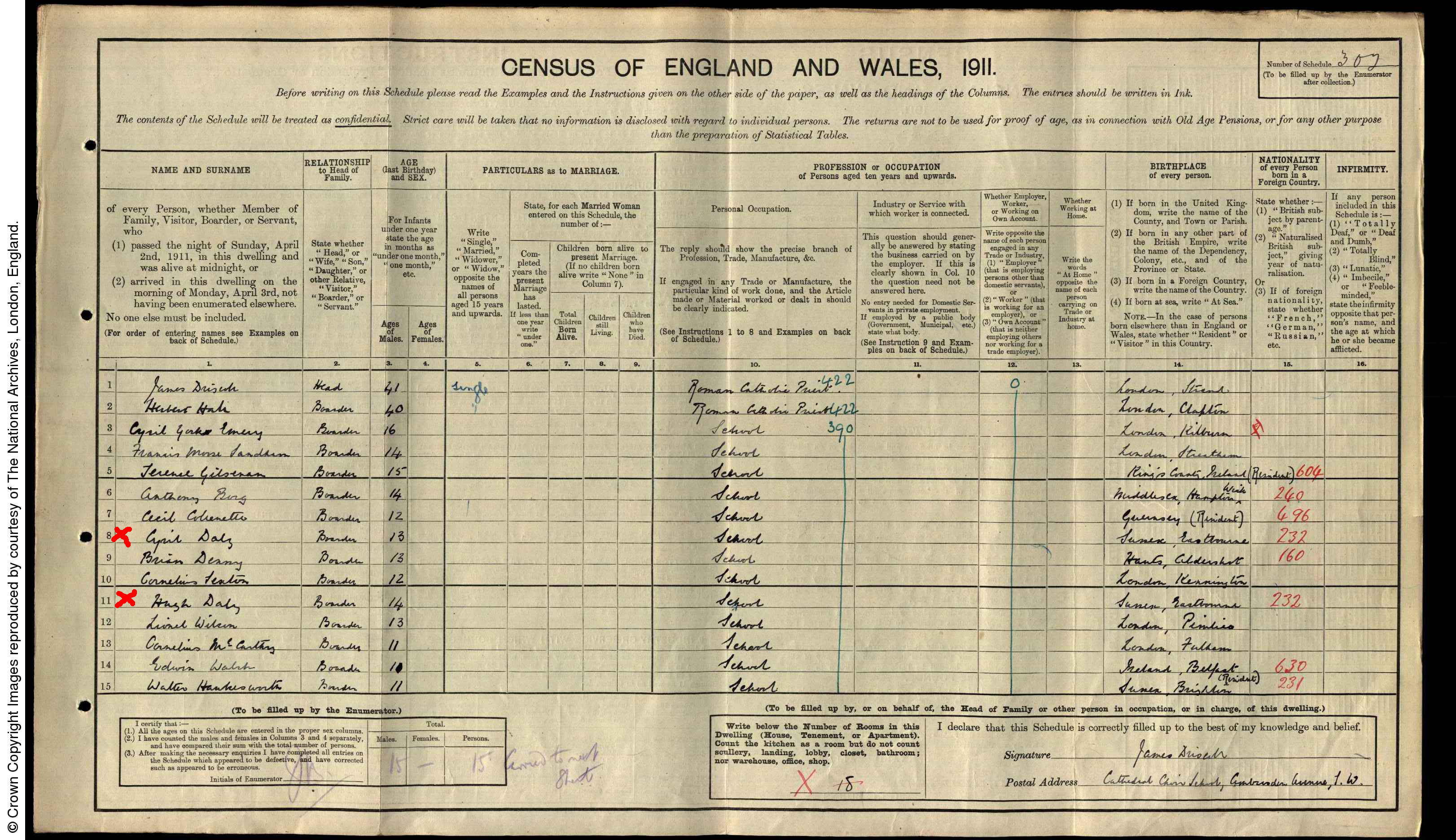 Choir School, Westminster where the Daly brothers were boarding pupils. The spire of the famous Cathedral is on left (from: http://www.choirschool.com/) 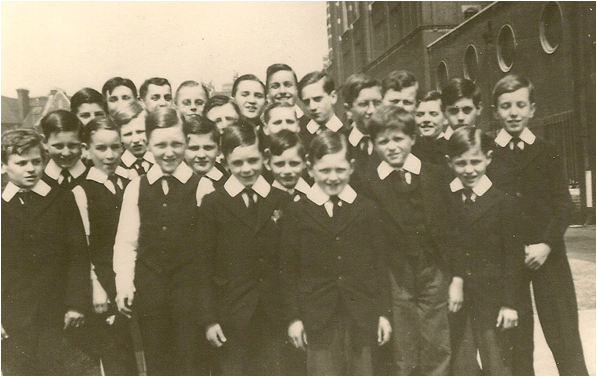 Dr William Daly died in 1915. His younger children apparently stayed in England and seem to have done well in life (one daughter much later became a magistrate in Plymouth). But the two brothers Cyril and Hugh surfaced in Dublin. We will see below how that came about.

IRA membership records show Cyril joined in 1919. He was elected Captain of A (Cyclist) Company, 2nd Battalion and subsequently transferred to F Coy. He was also Medical Officer of the 2nd Battalion. There are actually errors in this, explained later on. Only three other mentions of Cyril’s IRA activities had been found before the release online of his Military Pension files: 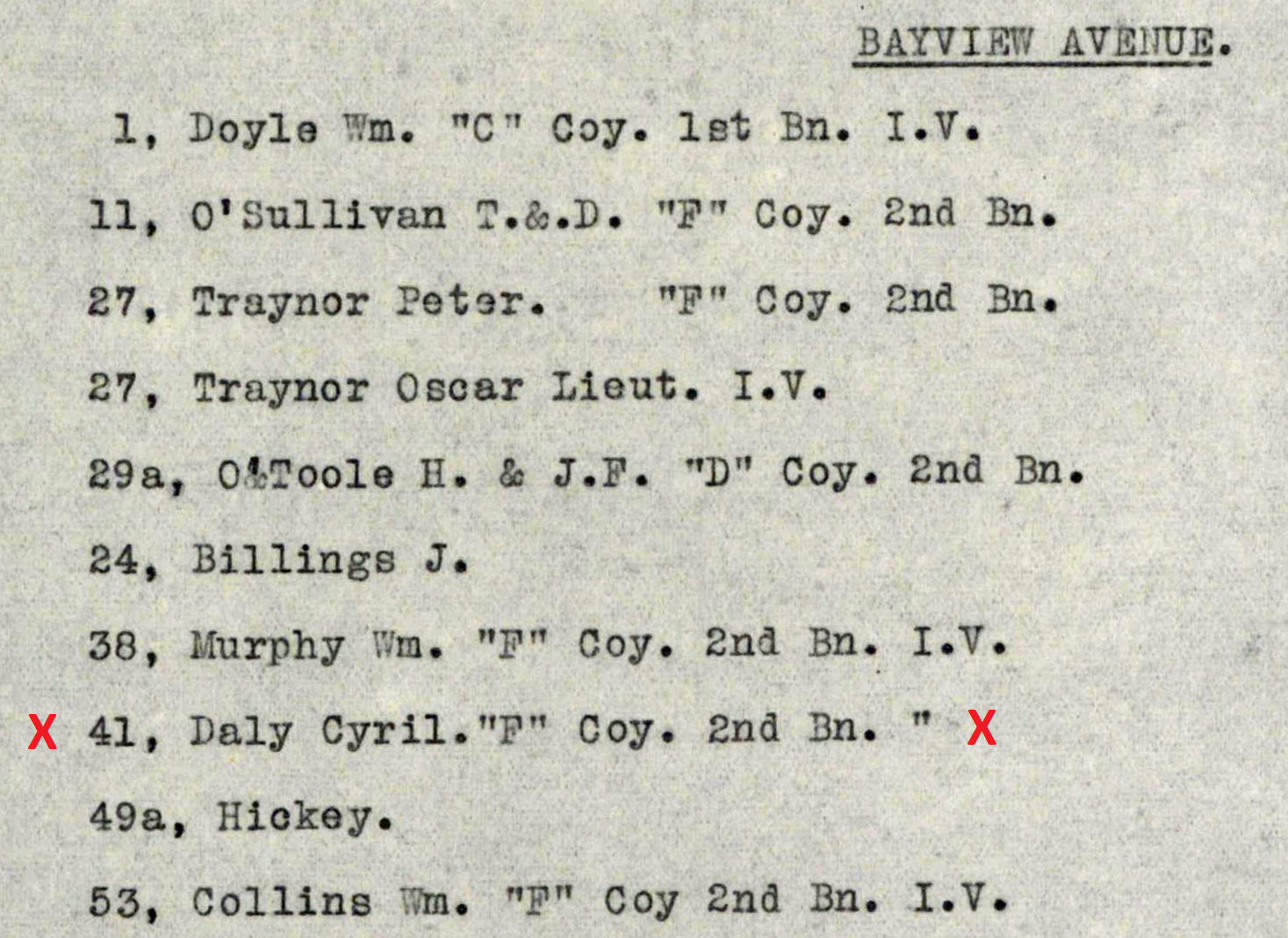 Only three months before the Custom House job Cyril had married a farmer’s daughter named Josephine Hunt while both of them resided at 96 North Strand, Dublin City. The marriage cert records him as a chemist’s assistant; and his brother Hugh as best man. The couple moved to nearby Leinster Avenue, the address on Cyril’s arrest report when he also gave his correct occupation. 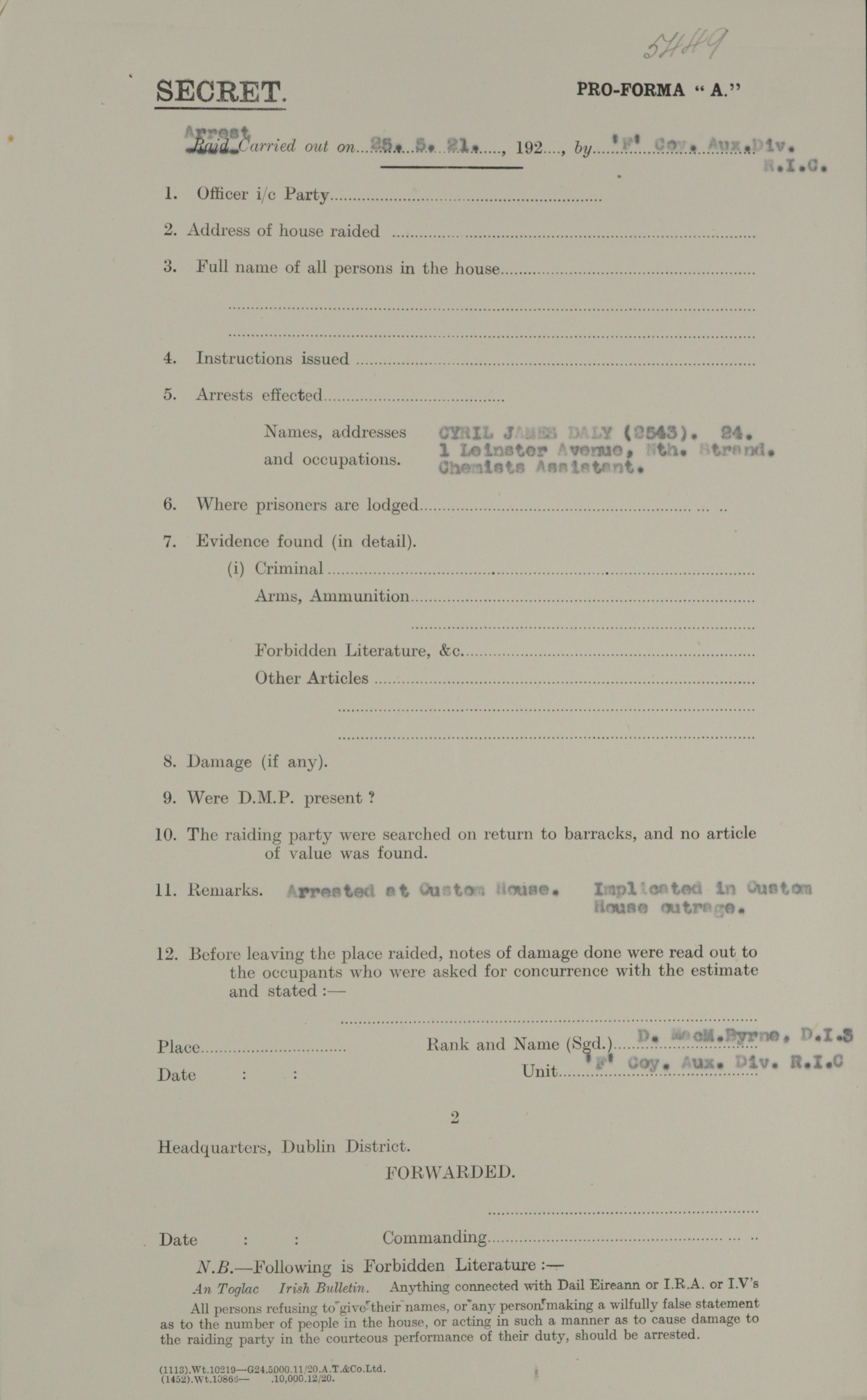 Like almost all the other Custom House men taken prisoner Daly was jailed in Kilmainham and held without trial until release in December 1921. Unfortunately we don’t know if he ever used his choir singing skills with his Kilmainham comrades either at Mass or during recreation seisiúns held as prison conditions relaxed to some degree in the later stages of their captivity. 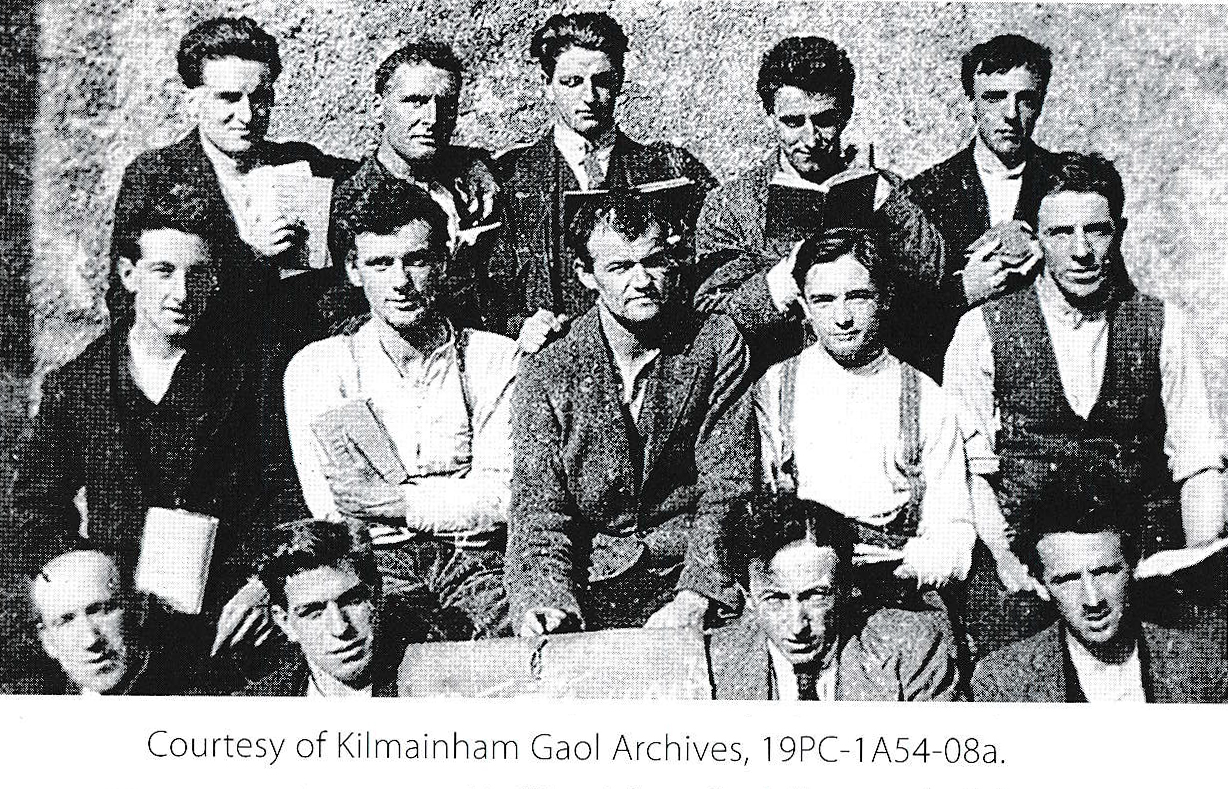 Another wider-view version of the first photo above has recently come our way. It also shows two other men as yet unidentified. 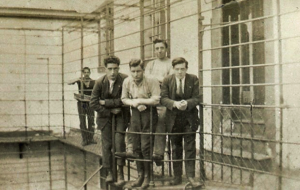 Cyril Daly, Frank Bolster and Christy Fitzsimons in Kilmainham with two unidentified others in the background (Courtesy of Neil Byrne, grandson of Christy).

Some very interesting additional information emerges in Daly’s application. To start, one of his references was provided by his own brother, Dr. Hugh Daly, Army Medical Service! But the relationship was known and declared. It turns out Cyril and Hugh had moved from England to an uncle in Sligo after their father’s death. Cyril claims he joined the Volunteers, Mullinabreena Coy, Ballymote in 1913 or 1914. He was then sent to Dublin to study medicine. When the Rising broke out he was at home on holidays in Sligo. Hearing about the events in Dublin he tried to return to the city but could not get a train even part of the way till about 1st May. On his eventual arrival he found only sniping going on (He did not claim to have fought). Daly said “As a result of my activities with IRA [sic] my people refused to allow me to continue at medicine and I had to drop my studies”. The disapproving party was his uncle and guardian, a Canon James Daly of Sligo who held the purse strings to Cyril’s father’s estate.

So, contrary to the IRA records quoted earlier above, he was definitely with Dublin Brigade, F Coy, 2nd Battalion at latest by 1917 before becoming Battalion First Aid Officer in 1918 and transferring to A Coy (Cyclists) which he claims to have founded and where he was elected O/C from early 1920. In that year, among other duties he treated the IRA wounded from the Mount Street, Bloody Sunday assassinations.

In addition to his roles with 2nd Battalion from 1918 to his arrest in May 1921, he was attached to the Staff of the Director of Munitions working on supply and distribution of chemicals and explosives out of Apothecary’s Hall and Fine Chemicals in Mary Street, where he worked. His O/Cs in that were Peadar Clancy and, after his murder, Sean Russell. Another reference confirms he was also very active on the political side as Secretary of the North Dublin Sinn Féin Comhairle Ceanntair until pulled off that by Brigade O/C Oscar Traynor.

If the above gives an impression of a lack of ‘real action’, that is far from the reality. Daly did take part in field operations such as defence of Sinn Féin HQ on Armistice night 1918; “trussing up” G-Men (as a warning); the burning of Killester RIC Barracks and the Tax Office at Beresford Place; and many other armed actions. Sheltering Frank Teeling for three weeks after the latter’s escape from Kilmainham is also listed. He does credit his wife (a Cumann na mBan officer) and her comrades with parts in some of these escapades. He also claimed he was in charge of one of the floors when the Custom House was burned. Sounds like Cyril Daly was a very busy man! But he does have the references to back up his claims and one referee says he was very active and “always on something”.

After his release from Kilmainham in December 1921 Cyril stayed with the IRA until Spring 1922 when he resigned as he could not agree to take part in “a fight amongst old volunteers”. But his Cumann na mBan wife Josephine did assist the anti-Treaty forces in Dublin. At that stage they were living on Millmount Avenue, Drumcondra. He describes in detail how he was in a quandary and after hesitating for some months, in October 1922 he became a “civilian employee” of the Free State Army as assistant to the Quartermaster, Medical Service. At that time of disorganisation and poor record-keeping, many medical (and line) officers had not formally attested before joining up.

This was rectified in Cyril Daly’s case on 11 March 1923 when he was officially commissioned as a 1st Lieutenant in the Medical Stores on Infirmary Road, Dublin. He also worked in St Bricin’s Hospital.

He was awarded a military pension at the rank of Commandant, based on a little over 5 years service.

H remained in the Army and his next posting was as Chemist in the Curragh Camp until 1931 and, after promotion to Captain in 1934, he served in the hospital up to 1939. Daly spent the rest of his military career as O/C at the Base Medical Stores Depot. In 1942 he became an Acting Commandant before his voluntary resignation on 30 January 1947. His older bother Hugh also served in the Army and was recorded as a doctor at Portobello Barracks on his marriage cert in September 1922.

When the Old IRA membership lists were drawn up in the mid-1930’s, Cyril was listed in A Coy on both critical dates (11 July 1921, when he was in Kilmainham; and 1 July 1922). He then lived at 14 Prince Edward Terrace, Carysfort Avenue, Blackrock, south Co Dublin – an ‘up-market’ address judging by current asking prices for houses there! 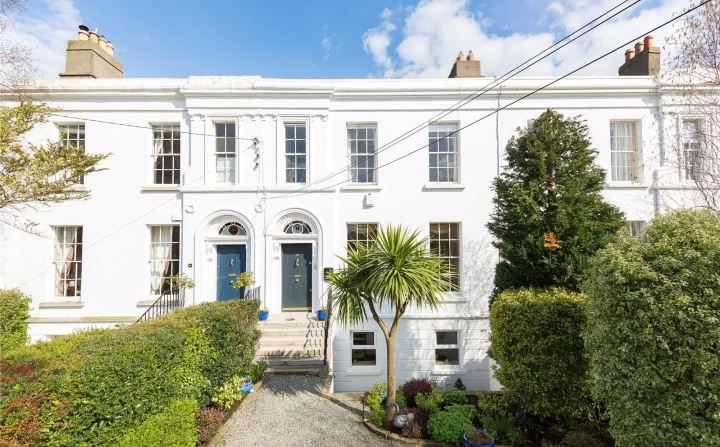 However, appearances can be deceptive, he was not a rich man. And anyway, Daly never forget his old IRA comrades. He had supplied references for several former IRA men in military pension applications in the 1920’s. We have seen him in the 1939 photo and he was also actively involved in the Custom House Memorial Committee. He attended the funerals of many of the Custom House Men as, one-by-one, they passed away. For example “Capt. C. Daly and Capt. W. (‘Bill’) Donegan” (another Custom House man) are listed at the funeral of old Company comrade Richard Seville at Glasnevin Cemetery in 1955.

Seventeen years later Cyril himself passed away in James’ Hospital, aged 74. He was late of Peter Place off Adelaide Road. His family death notice described him as ‘Retired Army Officer, A.M.S.’. Cyril James Daly was buried in Deansgrange Cemetery on the south side of Dublin (Plot H0/68, St Brigid section). He was survived by his widow, children, brother Hugh and two nephews, sons of Hugh. Possibly reflecting Irish social conventions (or snobbery?) of a time not so long ago, the only relatives named are two doctors and a priest; while his immediate family are strangely anonymous. Ireland has definitely changed in many ways since then – for better or worse we leave to the Kind Reader’s opinion.

So ended life’s journey for the Sussex-born Irish lad, former chorister at Westminster Cathedral and IRA Volunteer. He had travelled a long way to fight against the country of his own birth for the independence of his father’s native land, where he became a family man and career Army officer in a medical capacity.