Many Readers will be familiar with the major part played by the Flood family during the revolutionary years.

They paid a high price. Of six brothers active, Frank was executed by the British; Seán died young from mistreatment in British jails; and Tom spent many months in HM custody in the shadow of the noose.

Tom Flood was arrested at the Custom House (His brother Eddie got away). It is said Tom was jailed in Mountjoy and sentenced to death. Only to be reprieved first by appendicitis and then the Truce.

A big puzzle has been the lack of any record of his arrest, jailing or release. Raid reports, war diaries, courts martial files, the Mountjoy Jail registers and newspaper archives 1921-1922 produced no result. It has intrigued a few of us for a good while. 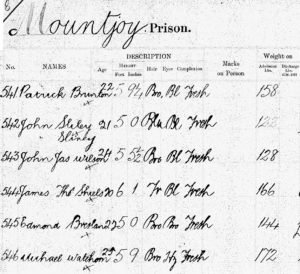 Six men arrested at the Custom House were definitely locked up in The ‘Joy on 26 May 1921.

As you can see there is no Tom Flood among them – at first sight (image copyright familysearch.org)

But we love a puzzle and reckon we have worked out what happened.

Tom Flood marked in three photos at the Custom House

First of all there was never a doubt about Tom’s arrest. He has been identified by his living relatives in photos of IRA prisoners taken on 25 May. Several BMH Witness Statements place him in the Custom House fight and say he was arrested that day. So do two referees on his Military Pension file.

He was definitely in Mountjoy. He says so himself, confirmed by fellow Custom House Men Cyril Daly and Mick Stephenson (also in The ‘Joy from 2 June 1921). Mrs Lillie O’Shea Leamy, a Cumann na mBan activist and Peace Commissioner in his locality, says she visited Tom in the condemned cell there. There is actual physical proof as well (even if we’ve not seen it). On 23 September 1921 Tom wrote and dated a tribute to his dead brother Frank in the autograph book of Sean Kavanagh, a fellow republican prisoner in The ‘Joy (Later Governor of the jail).

It is totally understandable he wanted to stay unrecognised. His arrest came only 2 months after Frank’s execution following capture in Drumcondra. The Rebel Flood name was high profile with the crown forces.

What we have wrestled with is how he kept his name off all records and out of the papers. We concluded Tom must have used an alias, a false name.

We know some Custom House men did successfully hide their identities that way. Francis & George Lewis were actually Tom Kilcoyne and Frankie Freyne; Hugh William Fitzgerald disguised Gerry Hughes; and Jim Foley pretended to be Seamus O’Neill (There must be other aliases on the prisoner lists, such as for Joe Griffin and Jim Conroy whose names are also missing. (We now know Conroy’s alias – January 2021).

They were in a large Custom House contingent in Kilmainham where, as uncharged internees, it may have been easy to maintain an alias. But there were only a handful from the Burning in Mountjoy. There, it had to have been extremely hard to ‘hide’ who you were. Particularly during savage interrogations in the Castle and then isolation in a condemned cell.

So, if Tom Flood did use an alias, what was it?

Let’s begin with what we know about the men arrested at the Custom House. They fall into three main groups:

(2) Three wounded IRA were taken to KGV Hospital – Charlie McMahon, Patrick McGlynn (later to the Mater Hospital); and Sean Ward (later to Mountjoy Jail). Walter Doolan was arrested near the Custom House on the evening of the attack (We are not forgetting Mick Stephenson who got away on 25 May but was picked up a week later on another charge and jailed in the Joy).

(3) A group of 16 – including the ‘hidden’ Tom Flood – arrested by the Auxies passed through brutal hands in the infamous Guardroom at Dublin Castle. Six were sent to Mountjoy Jail and the other ten to Kilmainham Gaol.

Individual arrest sheets survive for the sixteen men in this last category:

For this article we are focusing on the first 6 men whose names, descriptions and personal details are listed on the Mountjoy Jail register. They were held on a really serious charge – allegedly caught in possession of arms/ammo. Under the draconian Restoration of Order in Ireland Regulations (ROIR), that almost guaranteed a short court martial and a fast guilty verdict followed by the noose.

We can also check newspaper lists of IRA prisoners released from Mountjoy in January 1922.

The six names in Green above appear in the Irish Independent. There was a Laurence Flood from Co Kildare listed. But no Tom Flood.

From our checks of all available records we have no doubts about the identity of the first five listed – Ned Breslin, Johnny Wilson, Sean Sliney, Paddy Brunton and Michael Watchorn.

Therefore the remaining name, James Thomas Sheils, must be the alias used by Tom Flood.

Why? Here is our logic to prove it.

There was a real James ‘Jimmy’ Sheils (1896-1968). He was in Jacobs at Easter 1916, later Captain of E Coy, 2nd Battalion and after Independence a Colonel in the National Army. We had accepted he was the same man listed on the Mountjoy register.

However, a recent re-check of all details – and a flash of genius – ended that assumption.

Point 1. In fact James Sheils’ pension application (page 18) says he was arrested in November 1920 and interned till December 1921. Although there’s no matching record, it is hard to dispute as it was written by Sheils himself and signed off by his O/C. Anyway, why would any man at the Burning not mention being in that famous operation when applying for his IRA pension?

An obituary for James told of his 1916 service, role with E Coy and internment in Ballykinlar. No mention of the Custom House.

In addition, his Volunteer work was curtailed from 1917-1920. Owing to illness he had to step down as Captain in E Coy and take up 2nd Battalion Staff work. Even if he was not interned at the time of the Burning, it sounds unlikely he was fit for active service. On the other hand, Tom Flood’s many combat actions up to and including that day are well documented.

For all those reasons we believe Readers will accept Jimmy Sheils just could not have been at the Custom House on 25 May 1921.

Point 2. James Sheils was aged 25 when the Burning took place. Not 20 – which Tom Flood actually was. Getting away with supplying a wrong age is understandable.

But a man’s height is impossible to disguise. Tom Flood was 6 ft 2, very tall for those times. Mountjoy shows prisoner ‘Sheils’ as 6 ft 1. Noticeably taller than the real Sheils (measured by the Irish Army at 5 ft 11) and the other five Custom House men. We can see that from the photos above. And Tom’s height is confirmed by his relatives in the Commemoration Group.

‘Sheils’ gave no house number for his home address, Bessborough Avenue. The other five Custom House Men did. Perhaps the prisoner was unsure of the number (33) or did not want crown forces raiding that particular house?

‘Sheils’ gave Next of Kin as his father Denis. Correct, but hardly a secret to comrades of Jimmy.

Point 3 is highly revealing. Emmet Street, believe it or not, was the birthplace of Tom Flood in 1900! That is off the North Circular Road/Fitzgibbon Street in Dublin a different district from Jane Place near Connolly Railway Station where the real Sheils was born.

Point 4 is another clincher. On arrest, ‘Sheils’ said he was unemployed. But Mountjoy shows him as a Riveter. In total contrast to the real Sheils who had worked as a Printing Machine Feeder (1911 census), then Clerk before illness forced him to quit. It is true Tom Flood was not working when arrested, he was full-time ASU. Before that he had been an Apprentice Boiler-Maker in Dublin Dockyard Company. Riveting was a major part of that trade.

Point 5 tallies with the family story of Tom’s appendicitis while in jail. The ‘Joy record shows ‘Sheils’ spent almost 4 weeks in the military hospital. Consistent with recovery time after such major surgery involved in that era.

Finally, we suggest the inclusion of Thomas, his real forename, in the alias could well have been a secret code to inform family and friends of his arrest. It seems risky to use the name of someone already interned. But he may have pre-planned his story, reckoning Ballykinlar was the last place the British would look; and therefore very clever. A totally successful ruse it has taken almost 100 years to uncover!

So there are a few very warm, smoking guns – age, height, birthplace, occupation, appendicitis and a hint of his real name in the alias.

All strongly suggest that James Thomas Sheils was in fact Tom Flood – hiding in plain sight all the time. We are convinced of it anyway!

Under sentence of death?

While on the subject of Tom Flood, there is the story of his escape from execution, mentioned at the start of this article. No record exists of a court martial or sentence for him and the other 5 Custom House Men in Mountjoy. But the Jail register does say they were charged under ROIR and due for court martial. So what happened?

We reckon Tom’s sudden illness on the eve of the Truce is confirmed above. That would have postponed any intended trial for the six men even if the Truce had not begun the next day. In any event there can be no doubt they were saved by the Dáil vote in favour of the Treaty the following January. 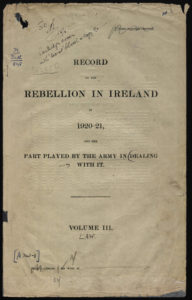 The British military by their own account  had already decided the men were guilty and fully intended to hang them. This can be seen in the BA’s “Record of the Rebellion in Ireland in 1920-21 – and The Part Played by The Army in Dealing with It (Part III, The Law)“. Despite the grandiose, self-serving title, their version of history stayed on a shelf, never approved by their political masters. Ignoring its obvious bias, boasting and whining against their own government, the document does contain many verifiable facts.

And we must keep in mind that the military was the supreme authority over life and death in Ireland. Not known for its clemency to put it mildly.

So we suggest it is fair to accept at face value the chilling intent (and implied frustration) behind the army’s words on page 20:

“…..The truce prevented the trial of some 30 persons charged with offences punishable by death. These included six men charged with high treason in connection with the burning of the Dublin Custom House.…..”.

Condemned, all but in name

Knowing the military’s track record of executions, we need hardly speculate on the inevitable outcome from a trial of the ‘Mountjoy Six’ – Messrs. Breslin, Brunton, Flood, Sliney, Watchorn and Wilson.

So we can safely conclude they were condemned men. Just not formally sentenced.

It is also worth recalling the Mountjoy prisoners were held till January 1922, well over a month after the Treaty signing and the release of their comrades from Kilmainham. Hostages in case the Treaty was rejected? It seems they were indeed used in that way, according to several historians. They were not alone in that situation; many others were also reprieved or released from long jail terms that day by a Royal edict of Amnesty for political offences. In modern times we have seen the same process followed in the north under the Belfast Agreement of 1998. 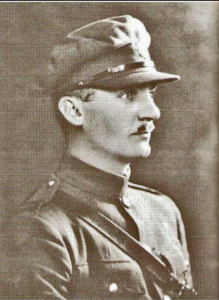 Happily all six survived to fight again. Sadly in the tragic Civil War, all but one on the pro-Treaty side. Another story for another time……

We will return to the story of Tom Flood and his family on another occasion. A related article covers his future wife’s experience at the Burning. We will also try telling the stories of the other men mentioned above. And we might say a little more about James Sheils in the future.