Why “The Clock Is Still Going”

In response to a number of queries, we explain below where the name of this website comes from. 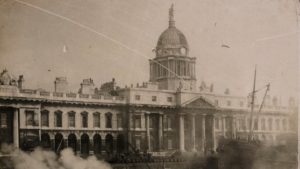 The clock is just visible as the Custom House burns

The Clock Is Still Going gets it’s name from a somewhat odd, but very interesting book called Ireland In Travail, published in 1922. Written by Joice Nankivell, an Australian and her English husband Sydney Loch, it recounts their experience of living in Dublin from Sept. 1920 to June 1921. 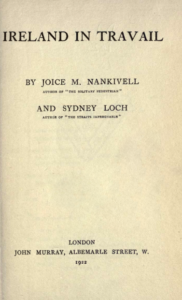 On the 25th May, hearing that the Custom House was on fire, Sydney writes:

I turned my steps that way. The wind was high, and there was little hope for the building. I came in good time to the shabby streets, which have an end upon the quays. The stream of smoke was rolling up, filling all one part of the sky. I judged the building must be in its death throes. At last, through a gap in the streets, I saw the Customs House straight before me on the other side of the river, and on the quays on this side all the world had gathered. When I emerged from my dive into the mean streets, I came against a wedge of several thousand people. They were from all parts of the city; but swallowing up all the others were the denizens of this slum quarter. There were women with babies, women without babies, and women who might have had babies with them had the Volunteers delayed their operations for a few weeks. There were urchins with boots and urchins without boots, and half-grown people in their fathers’ coats, and other half-grown people in their mothers’ skirts, and children who would grow up into touts, and other children who would grow up into beggar-women and flower-girls. And here and there, like islands in a sea, were prosperous citizens; high and low all brought to a single level by their curiosity. And, of course, there were Republican Volunteers in the crowd, and perhaps agents of the British secret service. 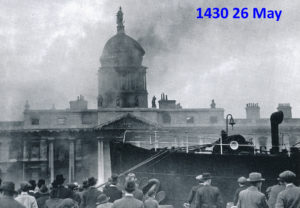 To the man who could bide his time the crowd presented a gap here and a gap there, and I slipped into this place and slipped into that place, and presently had a front row view of what was going forward. The Liffey held us in check. It was a high tide, and the wind sent the wave-tops into the air in spray. A quay was on the farther side, and rising beyond, the lovely building of the Customs House, that morning doomed to death and now in the agony. “Sure, and it’s the clock is still going, God save us,” said a lady on my left.

He goes on to say:

Upon the face of the building firemen were at work, pigmy people of no consequence beside the statue, who nevertheless seemed to be making a last stand like warriors driven to the corners of their country.

For the wind blew steadily, and every now and then sprang upon the great stone building in a squall, and the tops of the waves which held us where we were, would fly off in spray. And the fiery heart of the building would glow and redden and become fiercer, and the firemen would doubly toil at the hose, which looked like the dead body of some great sea-serpent lately come out of the river. Their backs would bend, and it would come after them ever so unwillingly. And other firemen, creeping about the grey face of the building upon their ladders, would peer at the molten heart through some gaping window, and direct tons of water within. And then the wind would sigh and fall again, and the water roaring down upon some outwork of the conflagration would batter it to death; and a new wind springing up would blow like a giant’s bellows upon the quenched sparks, blow a new fury of destruction into them, and they would leap up again.

He also records returning to the site on the following day:

“I departed before very long, vanquished. The clock was still going at the time ; but it had stopped before next morning. The following afternoon I was down that way again when the dome, which seemed to be supporting the statue of Commerce, capitulated. The flames pushed through its joints, like the edges of some starving tongue thrusting up from within; it crumpled, it palpitated, it curled in agony, it disappeared. But the statue stood, defying the lust of the great crowd gathered to see it crash down to the pavement, and was standing
high over the wreckage after the last spark had been quenched.”

Despite the flowery writing style & occasionally displaying some fairly strong class prejudices – not uncommon in books of this time – it manages to remain fairly even handed in its account of the perceived rights & wrongs on both sides.

The book is particularly strong in its description of the general uncertainty & atmosphere on the streets of Dublin with vivid descriptions of Auxy tenders speeding through the streets and the huge level of civilian searches that were undertaken. The frequency with which such searches were used as an opportunity to rob civilians is also highlighted.

The authors resided in a flat near St Stephen’s Green, where Mabel, the wife of Desmond Fitzgerald, also lived with her baby son (Fergus) while her husband was on the run. On one occasion when Desmond visited the house, it was raided and he was arrested. His wife’s first thought was the need to go to the Newspapers quickly and have the arrest published as this was seen as the best insurance against any ‘accidents’ befalling her husband while in custody.

There are some interesting insights into the fear felt by many of the British forces in dealing with an enemy they couldn’t see and the stresses and strains that the conflict had on both sides. “What I notice most about our boys is the way they have aged,” Mrs. Desmond Fitzgerald said to me. “Some of them, who were quite young men at the Rising four years ago, walk and talk like middle-aged men.”

Another notable occupant of the house was Darrell Figgis (the landlady had strong Republican sympathies!). While outside the brief of this blog, a review of his sometimes controversial & ultimately sad tale seems long overdue.

A further interesting section of the book relates to the arrest of Sydney following another raid on the house where some ammunition was found in the landlady’s bedroom. He was held for three days in Dublin Castle and both of the authors’ experiences during this time again provide a good insight to the period.

The book is long out of print, but a free downloadable version is available. Despite the stated prejudices & occasional lapse into overly flowery language, for anyone interested in a contemporaneous account of the time, it is strongly recommended.

One face of the clock today