Was your relative jailed for Burning the Custom House? 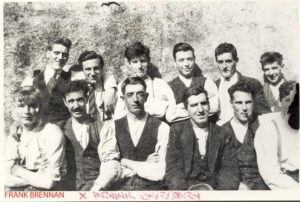 Most Commemoration Group members will have already seen the original Custom House Prisoner list covering the men arrested on 25 May 1921. It was compiled immediately after the attack. Our own Gerry Cassidy posted it on the Facebook page last year (A second list was completed later, omitting some uninvolved civilians who were released. That has also appeared on the Commemoration Group page).

We thought it would be worthwhile publishing that original list again on this site where it may reach a wider audience.

We are delighted to have met descendants or relatives of many men listed below.

However we are always on the look out for more information and new relatives of the Custom House Fire Brigade.

We have corrected some names and addresses which were misspelled on the original and added real names in a few cases (with special thanks to John Dorins). All addresses were in Dublin City. Any further corrections are most welcome. 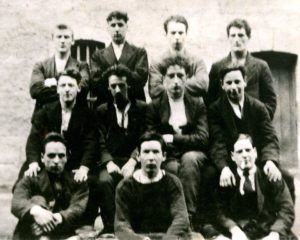 A group of Custom House men in Kilmainham

Six of the men shown ended up in Mountjoy

We should also mention Michael C. Stephenson who escaped from the Custom House but was arrested on another charge a week later and sent to Mountjoy. And, of course, Charles McMahon who was severely wounded at the Custom House and kept under guard in King George V Military Hospital for some months. And finally, Joseph Griffin, 2nd Battalion Intelligence Officer who is pictured in Kilmainham and later listed as a Custom House Prisoner but whose name is not on British files. 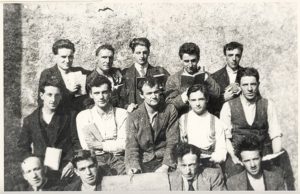 Some more of the men interned in Kilmainham

Our research into all the above-named has produced varying amounts of personal information, from lots to a little, to absolutely zero.

We have been able to tell the life stories posted on this site primarily using historical records in the public domain. In some cases relatives have been crucial contributors, sharing fascinating details and insights from family knowledge. And we can always use additional information on any of the men!

We are now appealing for help particularly with nine of the men listed above who were held in Kilmainham. Our digging has failed to unearth any details beyond the name and address given when they were captured. Unfortunately there are no records of residents in any of these houses in/around 1921 – almost all were described as ‘Tenements’.

It would be a great shame if these brave Old IRA Volunteers were forgotten or left in obscurity.

So, if you recognise a name or know anything about the individuals, please get in touch via this site or on the Facebook page.

Here are the men we need major help with (alphabetical order):

We guess that in all probability Jim Conroy and Joe Griffin must be hidden under some alias among all those names….. UPDATE August 2020: Jim Conroy’s alias is now known.

These men were also rounded up and taken into military custody when they didn’t provide good enough reasons for being in the vicinity of the Custom House on 25 May. Over a period of 3 weeks or so they were all released after investigations proved nothing against them. However James Kelly was quickly re-arrested and sent to Kilmainham. But IRA Volunteers John ‘Jack’ Young and Thomas Mahon, as well as possible members Daniel Owens and Patrick Carpenter, managed to talk their way out of captivity and stayed free until hostilities ended with the Truce.

We have hardly any information at all about most men on this list and could really do with your help here ……. do you recognise any names or addresses on it?

Thank you in anticipation.