We can thank Joe for the detailed Witness Statement he left covering the Custom House attack and much more besides.

Born Michael Joseph in Cong, Co Mayo on 27 September 1898, he was the second of 4 surviving children of Myles Gilhooly (RIC Constable 51316) from Leitrim and Honoria Coughlan originally from Co Limerick. The couple had met when working in Castlebar, Co Mayo (where Honoria was Prison Matron) and interestingly for those times, travelled all the way to Cabinteely, Co Dublin so her family could be at their wedding in 1895.

The father Myles was promoted to Sergeant in 1903 but died from TB in 1912. That left Mrs Gilhooly with four youngsters under 15 years to get by on a pension of £10 a year, plus £2-10 for each child till they reached age 16. They had no farm or other income. Tough times (Yet Honoria Gilhooly survived to 1947, passing away in Cork City aged 79).

Joe moved to Dublin as a teenager to work as a civil servant.

He joined the IRA in 1918 as a volunteer with C Coy, 2nd Battalion. In his WS he makes their initial activities sound almost humdrum as he describes weekly drill parades and occasional manoeuvres on the outskirts of northside Dublin, recalling only once getting some shooting practice.

Gilhooly didn’t even have a weapon until late 1919, then shortly had to give it up to be sent to the IRA in Cork.

However, earlier in 1919 he and 3 others had been detailed to watch the movements over a period of G-Division Det. Sgt. Patrick ‘The Dog’ Smyth, a determined adversary of the IRA (Died September 1919 after shooting by the proto-Squad). But, even in late 1920 when C Coy started street patrols intended to attack passing crown forces, Joe says he saw no action.

Gilhooly goes on to describe the setting up of the Active Service Unit (ASU) just before Christmas 1920. He is very modest, even self-deprecating, about his own selection for Section 2. His Section Commander was Tom McGrath and his other comrades were Jim Cahill (on compassionate leave for the Burning), George Gray, John Muldowney, Paddy Evers, Billy Doyle and Jim Heery – all captured with him at the Custom House. Joe gave the same address as Heery – 39 Hardwicke Street – when arrested). 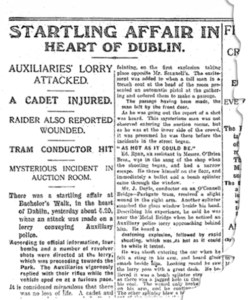 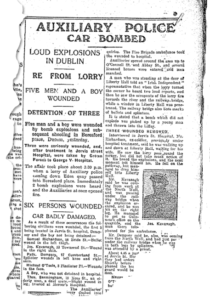 News reports on No 2 ASU ambushes on Dublin’s quays, 1921 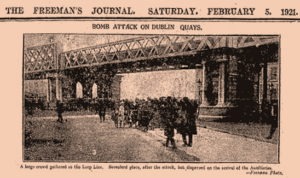 He also covers the tragic episode for the IRA in January 1921 when No 1 Section led by Frank Flood (brother of Tom) was almost wiped out in the Clonturk ambush disaster. At the same time that morning Joe and No. 2 Section were out in Summerhill hoping to ambush passing crown forces when they heard the gunfire and explosions echoing down from Drumcondra. At that they dispersed and only later that grim Winter’s day learned of the heavy cost among their ASU comrades, one dead, six captured, 5 of them later hanged on 14 March.

Joe finally recounts the ASU’s role and deployment in the taking of the Custom House; how a few managed to get away while most were captured; and then being separated for differing places of detention. He himself and all No. 2 ASU (except Tom McGrath hospitalised with a leg wound and Jim Cahill on compassionate leave) were arrested. That illustrates the significant losses in experienced men suffered by Dublin Brigade on 25 May 1921. Gilhooly could possibly have avoided arrest when a young Custom House staffer offered to get him out. But Joe considered it too risky and had to accept his fate when he failed to talk his way out of arrest.

As an aside Joe adds a compliment to a kindly Tommy who gave him cigarettes but refused payment for them, while he waited to be taken away to Arbour Hill Detention Barracks.

Gilhooly says they spent 3 weeks there undergoing several identification line-ups before being moved to Kilmainham and more identification parades. Unlike the Custom House men taken by the Auxies, the military prisoners did not suffer bad beatings or other serious mistreatment. He confirms that once the Truce commenced, the Kilmainham prisoners were allowed considerable latitude until their release that December.

Following the Treaty vote and the IRA split, Joe joined the new Provisional Government Army at Beggar’s Bush as a Captain in the Dublin Guard on 4 February 1922. He is recorded there in the November Army Census – aged 24, next of kin wife Sheila living at 7, The Coastguard Station in Ringsend. Joe and Sheila/Julia Coughlan had married in Berkeley Street Church on 26 September that year.

At this point there is no other information on his Civil War experiences, about which he did not speak to his extended family. But he did not stay with the Army much beyond 1923/4. 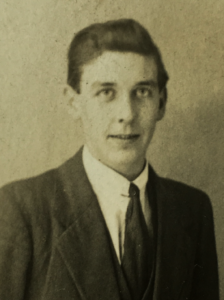 Joe had resigned from the (British) civil service in 1920 under a general IRA instruction, but after the Army he joined the Irish Revenue Commissioners for whom he worked in Dublin Castle until his retirement in the 1960s. He and his wife lived in Kimmage for some years.

The couple did not have children and according to a nephew of Joe, managed to enjoy several holidays abroad. The Gilhoolys were keen walkers and hikers. On one occasion they walked from Youghal to Cork City to visit relatives for dinner! They also travelled on the Continent years before that became commonplace. Their timing may look unfortunate; or alternatively we might consider them thrill-seekers of their time? They were tourists in Spain during the Spanish Civil War; and had been in Germany’s Black Forest during the rise of the Nazis. So they had plenty of interesting holiday tales to tell.

Joe at his sister’s wedding in 1949 (Courtesy Myles Reid)

Joe’s nephew says his uncle went on to live a quiet life having settled in Terenure. He kept bees which he brought to Glenasmole each year so they would produce the tastiest honey from heather. Joe also grew his own fruit and vegetables in the garden. It sounds like he enjoyed ‘The Good Life’ in his adopted city. That was in sharp contrast to so many of his old IRA comrades who suffered physical or psychiatric health problems, had to emigrate for work, otherwise fell on hard times or died too young.

In December 1950 Service Certificates were presented to surviving members of the GHQ Squad, Intelligence and Dublin Brigade Active Service Units at a special function held in Mills’ Hall, Merrion Row, Dublin. The illuminated scrolls were designed and printed by Colm O’Loughlin (Ó Lochlainn) who had done printing and other work for the Volunteers and Joe Plunkett at Larkfield in 1916. General Richard Mulcahy, then Minister for Education in the Inter-Party Government, made the presentations. He, as former IRA Chief of Staff, was one signatory of the certificates; General Paddy O’Daly (O/C, Squad and ASU’s) and Colonel Joe Leonard (Chairman, ASU Association) were co-signatories. Joe Gilhooly was one of the 80 recipients, many of who were Custom House Fire Brigade men (Certificates were later presented to relatives of deceased members who numbered 37 at that time).

The reunion brought together old comrades who had fought the British together but afterwards were divided during the tragic Civil War. A fantastic photo taken on the occasion happily shows 41 of them, united again, proudly holding their awards. Some men had aged prematurely and sadly did not have long more to live. However, Joe Gilhooly (2nd from left, back row) appears in good health). 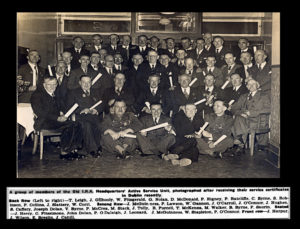 By the way, a spirit of post-Civil War reconciliation does not seem to have extended to the newspapers. The Irish Independent (pro-Treaty and Free State leaning), published the photo above and a report listing all Service Certificate recipients. The Irish Press (anti-Treaty Republican and Dev-owned) appears to have ignored the event altogether.

Move forward almost 20 years and the ASU ranks had really thinned. In 1969 seventy-one deceased members were listed on a Memorial Mass card. Joe Gilhooly was not included – but that same year was to prove tragic for his family in Terenure.

His wife Sheila’s sister Máire Coughlan who lived with them died on 28 May. Just two months later Sheila also lost her husband when Michael Joseph Gilhooly passed away at the age of 70 at his home on 14 August.

He was buried beside his sister-in-law in Cruagh Cemetery, south Co Dublin. They were joined by his widow Sheila 13 years later. 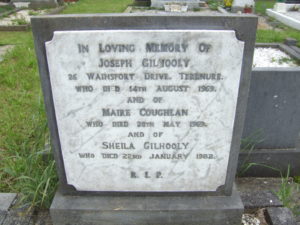 Many thanks to Joe’s nephew Myles Reid for interesting family insights.