Golf trophy saved. But careers go up in smoke. Views from a Different Custom House Window 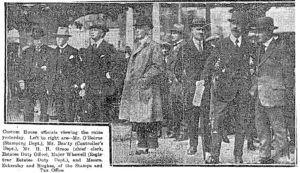 Custom House officials watch the fire. None of the men covered below are in this photo (Irish Independent, 27 May 1921).

As you can easily imagine, not everyone saw the Burning as a blow for Irish freedom, especially British officialdom.

For a change, here we present some very different tales from the event by Sir Henry Robinson head of the Local Government Board (LGB) based in the building. He was the senior official there in May 1921.

Editor’s notes: As something written in 1923, its style is old-fashioned. The order of some passages has been changed to make the story flow a bit better, but no words have been altered. Entries in red and between square brackets [ ] have been added. One warning – Robinson was a committed loyalist and unionist and was also noted for exaggerating. But we will let him speak for himself without further interruption.

“If I had been five minutes later in leaving that morning I should have shared the risks of the rest of the staff…….With my usual good luck I was not in the office at the time of the burning. I had for years past offered a silver cup for a golf competition to men of the staff. It had been my practice to be present at the finals and to ask the finalists to lunch with me at [Royal Dublin Golf Club] Dollymount, so at about five minutes to one I left the office to see the final played off, and met the competitors just as they were coming up to the fourteenth green in the first round. We heard a rattle of machine-gun fire over Dublin, but as this was nothing unusual we thought little of it. Soon we saw a very heavy pall of smoke rising in the direction of Amiens Street, and then more machine-gun fire, and it entered into our minds that, as Ulster had just started its new government, Amiens Street terminus [now Connolly Railway Station] was being set on fire as a protest against the partition of Ireland. 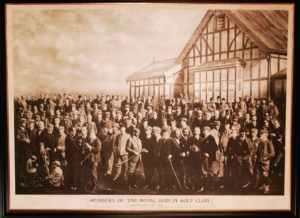 However, when we got in to lunch I heard one of the competitors holding an animated colloquy on the telephone. He had been doing very well in the first round, and to him the possession of the cup was the first consideration in the world at the time, and this is what I heard: “Burnt down, do you say? — Burnt to the ground! What! Papers and everything? — Anybody hurt? — Through the arm? — Well, look here, is the cup all right? — Thank God!”

Turning to me and the others who were listening, he said: “The Custom House has been burnt to the ground and nearly everything in it is burnt, but the cup is safe. They have got it away. By Gad! I got a great start, I thought it was gone.”

“Sir George Vanston, our legal adviser, had rather a curious experience. The Sinn Féiners for some reason overlooked his room. He is quite deaf, so he never heard the firing going on, and he was working away while the place was burning fiercely and bombs and machine-guns keeping up a fearful din outside prior to the surrender. At 1.30 he rang for a messenger to bring him up some lunch; getting no reply, in five minutes he rang again. Once more he rang, and this time, being very angry, seized his hat and went down the corridor to look for a messenger. He ran into the arms of a military officer who was searching the stone corridors for hidden Sinn Féiners. Vanston shouted out he was the board’s legal adviser, but the officer would not let him go, and grabbing him by the arm took him round by the back door to make him line up with the others under Brooks Thomas & Company’s walls.

However, when they were nearing the door Vanston perceived from the heat and smoke that something uncanny had been happening and turning to the officer he shouted at him: “Has there been any firing going on?” “I thought he looked very queerly at me,” said Vanston, describing his experience to me afterwards; “but anyway he pushed me out into the street and let me go.” The officer, I heard afterwards, was so amazed at Vanston’s question that he thought his mind had given way under the shock and excitement, and as he did not want to be saddled with the care of a lunatic he turned him out into the street.”

An English gent on the run?

“The destruction of the Custom House proved the undoing of our assistant secretary Mr Leach, a very loyal gentleman. When the Sinn Féiners were surrounded by the military and paraded with the civil servants after the fire they all claimed to be members of the staff of the Local Government Board, and the assistant secretary was called upon by the military to verify this. Mr. Leach pointed out to the military those who really were members of the staff, and denied all knowledge of the others, who were accordingly, marched off as prisoners. The following morning Colonel Johnstone [DMP Commissioner] sent me an urgent message to get Leach out of the country at once, as the Sinn Féiners were looking for him, and were determined to shoot him at sight for having failed to perjure himself on behalf of Sinn Féin prisoners who had alleged that they were officials of the board.

Leach was a highly strung, excitable man, and I did not want to frighten him by telling him plump outright that his life was in danger, but without doing so I managed to persuade him that he ought to take a holiday in England and to take it soon, as one never could tell whether the Sinn Féiners might not bear him malice over the duty he had been called upon to discharge. He agreed that it was unwise to run risks, and he went to London that night, but on arriving the Scotland Yard people met him and did not mince matters. Their information was that men were following him, and he must move from place to place, never stopping for two nights in the same house, and must put all idea of returning home to Ireland out of his head.

This was a serious thing for him, as he had to sell his house at a loss and give up his appointment, and had very heavy expenses in moving his family about in England. He had a bad nervous breakdown, and financially he was very hard hit, as the Treasury gave him a retiring allowance which did not nearly compensate him for loss of income and the out-of-pocket expenses he had incurred.” 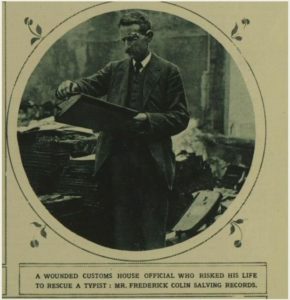 A Custom House official in the gutted building

Brief notes on the officials named above.

Henry Augustus Robinson (20 November 1857-16 October 1927) was born near Belfast. He became a temporary inspector with the LGB in 1879 and rose to head the organisation at the Custom House in 1898. It did him no harm that his father had earlier held the same job! 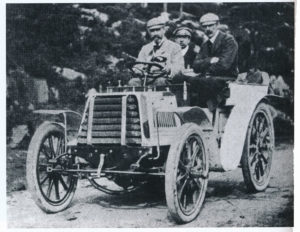 Robinson, passenger on right, in a 12 hp Panhard car in Co Mayo, during the 1901 IAC Motor Tour of Ireland (RIAC, Guinness Seagrave Archive).

According to a biographer, he was regarded as a very clever and ambitious bureaucrat. Robinson saw his role as simply keeping his many political bosses out of trouble and never had a personal vision for his country’s advancement. But he was also known as an entertaining personality with a great talent for mimicry and an endless supply of witty ‘Oirish’ anecdotes picked up on his many travels in the West of Ireland. 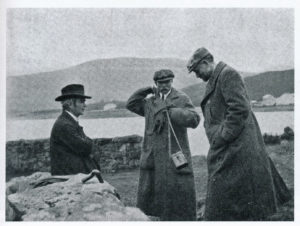 Robinson, centre with Chief Secretary Walter Long and a parish priest in the West of Ireland, 1905 (from Memories: Wise & Otherwise, by Sir Henry Robinson).

After serving under no less than twenty Chief Secretaries in the Castle, with the end of British rule Robinson’s LGB was scrapped and he was pensioned off. His home was looted early in the Civil War, supposedly by anti-Treaty IRA (but this is not certain). He decided to take the advice of the Free State government to leave the country in case of further recriminations. No surprise – in 1922 he headed to England.

Robinson wrote two memoirs (said to be entertaining but full of exaggeration) which showed his great regret over the disappearance of the crown and British standards of manners and behaviour from the Free State. We can only wonder if he included the Tans in that!

His loyalism and ability were well summed up by Free State Home Affairs Minister Kevin O’Higgins. Asked who he regarded as the most formidable enemy of Irish independence, O’Higgins replied: “Sir Henry Robinson. He had the brains”. 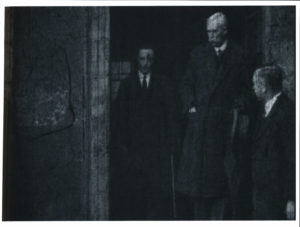 If you’d like more about the man Robinson see this review of a recent biography, Activities: Wise & Otherwise by Brendan O’Donoghue which this writer (surprisingly) found a very interesting read.

The photos of Robinson were scanned from the book.

George Thomas Barrett Vanston, Kt., K.C. (31 May 1853-6 July 1923) was a native of Terenure, Dublin and was married with four children by 1921. He was a brilliant academic and qualified in law from Trinity College becoming a barrister at a young age in 1878. Vanston was appointed legal advisor to the LGB in 1900 and wrote several major studies on local government and public health. He retired on the changeover to the Free State and stayed living in Dublin but did not enjoy his leisure for long.

George Vanston met a strangely ironic end considering his survival in the Burning. He died during a killer heatwave while on a family holiday in North Wales, of all places. 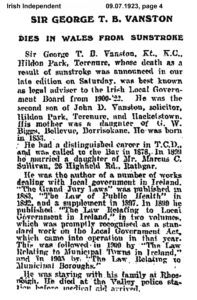 He was buried in Mount Jerome Cemetery, Harold’s Cross, Dublin. His family remained in Dublin where his widow Clementina died in 1948.

Ernest William C. Leach (27 July 1859-13 March 1929) was the son of a Surgeon from Southwark, London. He joined the civil service in London and married Madelina Isabel Vindon in 1890. By 1894 he had been posted to the LGB in Dublin. The couple had 6 children, the 5 Dublin-born surviving. They lived in Rathgar, Milltown and then Rathmines – affluent southside suburbs of Dublin.

While some IRA remarked on Leach’s identification role at the Burning, none showed any malice in their written statements. Possibly they felt he was only doing his job; and anyway, he wasn’t an Irish traitor or informer. However, others in the IRA may have taken a stronger line. After all, it was a war against crown rule at all levels, military and administration.

It has not been possible to confirm whether Mr Leach’s life really was under threat, forcing him to go ‘on the run’ across the water. But he did stay in Britain and regularly moved address. He survived for another eight years before dying from natural causes aged almost 70, in Richmond, Surrey. His widow passed away in Twickenham, London the following year. Their combined estates were worth £4,630 (almost £283,000 in today’s money), suggesting they hardly died in poverty despite what Robinson claimed.

So there we have examples of a very different type of ‘casualties’ from the Burning. All very typical of the senior administrators in Ireland under British rule – male; non-Catholic; two from the Irish Ascendancy and an Englishman; highly educated, almost intellectuals; and loyalists to a fault.

The excellent book ‘Custom House People’ by Joseph Robbins was very helpful with some facts. That opinion – and many others above – are those of this writer!

Dedicated to the late John C. Culleton (23 Dec 1938-13 Feb 2017). A great amateur historian and really helpful online contact who pointed me to the above stories, as well as far more interesting stuff about my family history. RIP, ‘ballyroughan’. D.W.