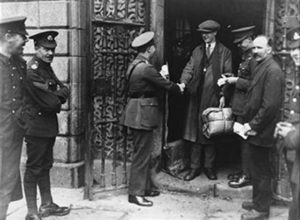 Angela ‘Angie’ Kirwan (née Rooney) RIP was a well-liked member of the Group who sadly passed away on 28 December 2017.

In the same month of 1921 her grandad George Byrne was filmed puffing on his pipe with a big smile on his release from Kilmainham Gaol along with his comrades of the Custom House Fire Brigade, in a British Pathé newsreel taken on the occasion. George, 2nd from right in photo above, seemed to be almost acting like a father figure or minder as he oversaw his generally younger fellow internees being let out the gate of that formidable, imposing prison.

Angie posted on the Commemoration Group Facebook page about her grandfather several times. Unfortunately we never managed to learn a lot about him during her lifetime. 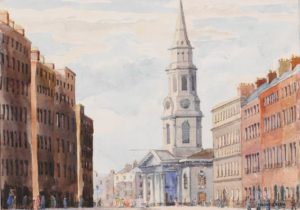 How George became involved with the Dublin Brigade may never emerge, but here is a short outline of his life as best we have been able to find.

George Byrne wasn’t typical of the men arrested at the Burning. Most were much younger, single lads. Many were full-time volunteers with the ASU or Squad; or 1916 men; or later became famous/notorious during the Civil War.

In 1921 Mr Byrne was aged 48, a Coal Worker and father of several children who lived at 6 Quinn’s Cottages, Portland Row. He does not appear in any Witness Statements or on later IRA membership lists or in the military pension files (to date). A real unsung hero, he was most likely with F Coy, 2nd Battalion, Dublin Brigade based on where he lived.

George was born in Temple Street, Dublin City on 10 July 1872 towards the end of a family of 4 girls and 4 boys who lived in the north inner city. His birth – and those of most of his siblings – seems to have escaped registration with the civil authorities. But their baptisms in the Pro-Cathedral between 1860 and 1876 were recorded.

His dad Thomas worked as a Car Man and his mam was Julia, originally Smith. Where they came from or when they married is not known but their children were all born in Great Britain (now Parnell) Street and in and around nearby Temple Street (location of the famous children’s hospital).

George’s parents Julia and Thomas died in 1892 and 1898 respectively.

He got married in 1897 when living at 16 North Cumberland Street to fellow Dub Elizabeth Rae of the same address. She had been raised in the Church of Ireland faith and converted to Catholicism shortly before their wedding in the Pro-Cathedral. Later that year their first child, a girl named Susan after her maternal grannie Curtis, was born in 7 Berkeley Lane, up towards Phibsborough. 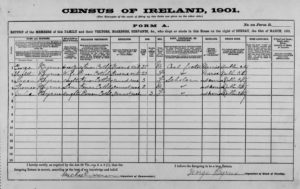 By the 1901 census the Byrne family, still at that address, had added four more children. Sadly, seven years later George’s wife Lizzie Byrne died in hospital from TB at the early age of 30. 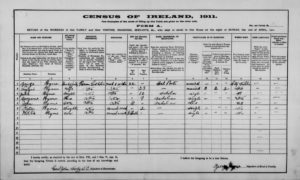 When we see the Byrnes in the 1911 census at Dorset Street, George has remarried to another Elizabeth (née Ryan), and they have two small children in addition to their half-siblings from the first marriage. We learn from those census returns that George worked as a Coal Factor (1901) and Coal Porter (1911). His ages are not accurate or consistent, but that’s not unusual for the time.

Unfortunately we know nothing of his IRA activities apart from his involvement in the Custom House Burning, arrest and release from captivity. It appears he went back to civilian life afterwards, working hard to support his wife and family. As mentioned, at the time of his arrest they were living on Portland Row which runs down from Summerhill to the Five Lamps on the North Strand. The family later relocated, probably more than once, as people had to do in those times. It may be just as well they did move from Quinn’s Cottages which were badly damaged in the North Strand bombing by the Luftwaffe in 1941 (images here).

Sadly George became a widower for a second time some time before he passed away suddenly on 8 December 1949 while working as a Watchman. His death certificate says he was “Brought in Dead” to Jervis Street Hospital. Following a Coroner’s Inquest which found he died of natural causes, George Byrne, aged 77 and late of 9 Fitzgibbon Street and Dublin Brigade Old IRA, was buried in Mount Jerome Cemetery (Plot A77-601). 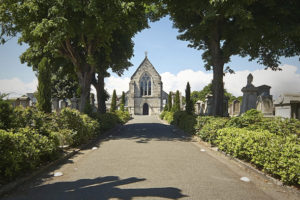 Mount Jerome in Harold’s Cross where George rests in peace

During his lifetime George had seen some happy days when at least three of his children married.

His eldest son, Thomas (born 1899) wed Honor Smith, a widow, in 1920; the groom’s sister Mary Anne Byrne was the bridesmaid. Thomas died young and his widow remarried. One of Thomas’s daughters is still hale and hearty in her early nineties.

George’s second lad John, born on 6 December 1904 at 25 Lower Dorset Street, married Mary Fitzsimons in 1927 (with Thomas and Honor mentioned above as witnesses). A granddaughter of theirs, Julie Murphy was very helpful by confirming Byrne family information. 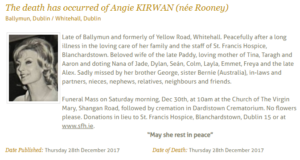 We expect that as a young child Angie got to meet her grandad George Byrne. And hope that she’d be happy to see this short tribute to him dedicated to both their memories.