Patrick Reilly, Tom Kehoe, George Gray and John ‘Spivis’ Dwyer – all dead within five years of their arrest at the Custom House. They died in different circumstances and places. Colonel-Commandant Kehoe is undoubtedly the best known and remembered of those Lads. Let’s have a look at the stories behind the other names, beginning with Patrick Reilly.

He proved a bit difficult to trace. The only definite reference was on the Custom House Prisoner list, address 107 Lower Gardiner Street. No age, occupation or hint where he came from so searching birth or census records was fairly pointless. It didn’t help that the address was listed in old Dublin street directories as ‘Tenements’ and no occupants were shown. But, enough moaning about the spills and thrills of research.

Recently two lucky coincidences provided enough hints to piece together what turned out to be a sad story with a strange but happier twist later.

At this year’s commemoration the writer was kindly loaned a book from Gary Deering‘s extensive library, “Kerry Landing” by Niall C. Harrington, a former National Army officer. It turned out to be an excellent read. And a huge bonus – on page 131 in a list of nine Dublin Guards killed in action on 2 August 1922 during the Civil War battle for Tralee, Co Kerry – one name and address popped out. Here are the men’s details:

The last man seemed to be the very one we were looking for. However, needless to say, confirmation took another few steps…. 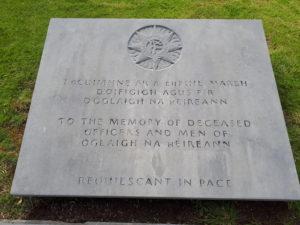 The newspapers helpfully listed by Niall Harrington published addresses for all but one casualty – naturally Patrick Reilly! His death certificate listed no home address either. But finally his Glasnevin burial record did show it, as Harrington had acknowledged many years ago. Patrick’s age was recorded as 21 or 22, but still there would be a few possibles to sort through in the archives.

The second breakthrough came thanks to the fantastic work by James Langton on identifying the Dead of the Civil War.  This writer happened to glance through one of his lists – there was that Gardiner Street address again – and a reference to a military pension file (2D343). Turned out young Reilly was listed as Desmond Patrick O’Reilly….. (His mother later said his correct name was Patrick Desmond Reilly).

He was born on 27 November 1901 in the Rotunda Hospital, his parents John (a Labourer) and Bridget née Canavan lived at 14 Upper Buckingham Street in Dublin’s north inner city. No forename was recorded on his birth registration, but the 1911 census shows Patrick at the correct age and, more significantly, the same address with the right parents. He was one of 10 surviving Reilly children, most of whom were girls. 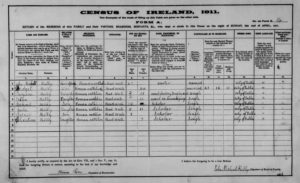 In 1921 when Patrick was arrested at the Custom House, the family were living at 107 Gardiner Street. The financial impact on the Reillys was severe because Patrick, who worked as a Coal Hawker, was the sole earner and handed up £2 weekly when he was working. His father John was an elderly invalid for many years, so could not work.

After almost 7 months internment Patrick was released from Kilmainham in December 1921 and returned home fit and well. But 8 months later he went on a ship to Kerry to land at Fenit with the National Army.

The next time he came home was in a coffin. 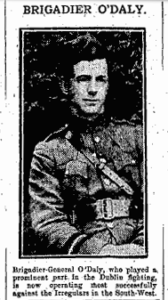 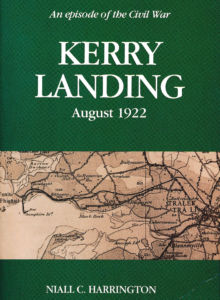 In his book, Niall Harrington says the capture of Tralee from the Republican defenders by the National Army attackers led by Paddy O’Daly and Jim McGuinness is generally treated as “a military brush-aside, accomplished……..with with little opposition“. However, reading his account and seeing the Free State fatality list above paints a different picture. There were heavy exchanges of fire in several locations. It was certainly no walk-over, the Republicans fought hard before evacuating, having also suffered casualties. Harrington himself had a very narrow escape in Castle Street when his companion, Tom Larkin (listed above), was mortally wounded almost by his side. Eventually the ‘Ex-Mutineer’ Rolls Royce armoured car had to be brought into action to clear the defenders from the town. But Patrick Reilly and his other comrades had already fallen in action. While advancing near the Munster & Leinster Bank, young Reilly was shot dead by a sniper operating from O’Hara’s shop at Moyderwell.

The nine dead soldiers were carried back to Dublin on the S. S. Lady Wicklow and arrived on 5 August at Commons Street, North Wall, not far down-river from the Custom House. At that stage the relatives had not been told of the deaths. The bodies were brought to Portobello (now Cathal Brugha) Barracks where they were received by National Army top brass. Private family visits were facilitated but it seems little information was provided to the bereaved about how or even when their loved ones had died.

Requiem Mass was held in the Barracks Library, with mourners overflowing onto the square. A public military funeral was organised for Monday 8 August with leading pro-Treaty military and political figures attending – obviously with propaganda in mind. The procession travelled past large crowds lining the route from Portobello to Glasnevin Cemetery where the dead soldiers were laid to rest in the Army Plot with full military honours. There was extensive press coverage with many photos.

Press photos of some of the fatalities at Tralee, sadly not including Patrick 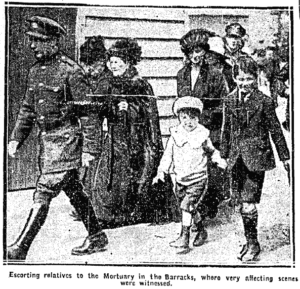 Relatives being escorted to view the remains

National Army assembles for the funerals

There were errors in the Army records which were very poorly kept in those days. Private Patrick Quinn was initially wrongly identified to to the newspapers as Patrick Byrne of Pimlico; and Corporal Carson’s surname was mis-spelled. Even the inscriptions on the memorial tablet recorded the incorrect date of death (3rd instead of 2nd August), except for Patrick Reilly. Far worse is the current state of those early National Army memorial tablets – all the names are now worn and faded (Patrick’s plot reference is KD84, close to Michael Collins’ grave).

The barely legible names of the Tralee Free State fatalities in Glasnevin Cemetery, with Patrick Reilly’s at the top.

Patrick’s mother Bridget received a military dependant’s allowance of 15 shillings a week until her death in 1935. By that time, she and husband John had re-located to Market Street, Trim, Co Meath which occurred after a massive change of fortune for the family. In 1930, James J. Reilly, the only brother of Patrick’s father John had passed away. He was the owner of a very successful and significant local drinks and mineral water business in Trim, J. & E. Smyth Co. which he had acquired following the death of its owners.

At the time of James’ own death the firm employed 80 men full-time and was valued at £60,000 for Estate Duty, €4.4m in today’s money. John, as the only next of kin, inherited the lot, turning from an unemployed Labourer unfit for work into a very rich businessman!

John Reilly owned the business from 1931 and while we have not followed the subsequent fate of him or his wind-fall business, we hope that part of the story had a happy ending.