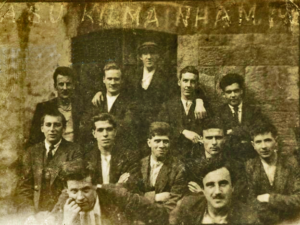 ASU Men in Kilmainham (Names listed in text below)

Readers may have seen how Patrick Reilly and Tom Kehoe  became the first of the Custom House prisoners to die, killed in action with the National Army during the Civil War.

The next of their comrades to join them in the grave not too long after his release was George Gray. He survived the 1922-23 conflict on the pro-Treaty side, only to succumb to illness the year after hostilities ceased. The cause may have been a legacy of his active service and imprisonment. And as we shall see, his early death may also have been a happy release for him.

During the War of Independence Gray served as a member of the Dublin Brigade ASU but had survived very tough times before that. 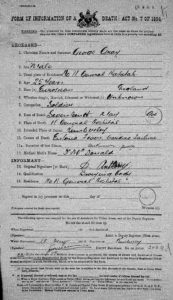 British military record of the death of George’s father.

His life started in tragic circumstances on 24 May 1900 at home in 35 Bow Street, near the famous old distillery on Dublin’s northside. The death of his soldier father had occurred only seven days beforehand. His mother named the baby after his late dad George and grandfather Matthew.

George Gray senior, who may have been born in England, was working as a Carriage Fitter in Dublin south city when he married Dubliner Maryanne Browne in 1898. Shortly afterwards he enlisted as  Private No. 4566 in the 2nd Battalion, Royal Dublin Fusiliers and was packed off to South Africa for the Boer War. Just one of Queen Victoria’s many campaigns to cling on to her worldwide Empire. However, it seems unlikely George senior ever saw any action. Like many of his comrades, he fell victim to a local disease – in his case enteric fever. On 17 May 1900 in a hospital at Kimberley, heart failure killed Private George Gray at the age of 25. Following customary BA practice, his body was not re-patriated, being buried locally. Word of her husband’s death had reached Mrs Maryanne Gray by the time her son’s birth was registered on 30 June.

So in just over two years the unfortunate woman had become a widow and new mother at the age of just 22. We can only imagine that life afterwards must have become very tough for her and young George. They do not appear in the 1901 census – who knows what their circumstances were at that time. We can only hope they avoided horrors like the Workhouse and possibly received some financial assistance as military dependants.

Anyway, Maryanne next surfaces in 1904 when she remarried on 23 November while living in Upper Dorset Street. Her second husband was – just to confuse us, yet another George! Full name George Joseph McMahon, a Plumber and Gasfitter who lived at the same address as his bride. 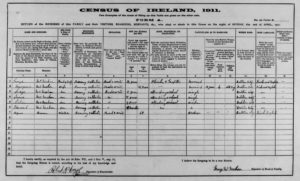 By 1911 the McMahon family were in Lower Dominick Street and recorded 4 children, young George, a schoolboy aged 11, being the eldest. The form was filled to suggest George McMahon was the father of all the children – the younger George’s surname was actually entered as McMahon. However, later information confirms that lad was indeed our George Gray. It seems the family was a good unit who pulled together and at least three more children were added up to 1918.

Young George grew up and became a manual worker, styled in records as “Labourer”. He joined the 2nd Battalion, Dublin Brigade and was later selected for No 2 ASU. He would have taken part in most if not all of that unit’s operations up to 25 May 1921.

One particular action he is named in is an ambush on military lorries near Liberty Hall, recounted by his comrade Jim Cahill (BMH.WS0503). The plan had been to attack Auxy tenders expected to pass en route upriver from the quays westwards to Phoenix Park.  As things turned out, army lorries appeared going in the opposite direction and George acted on impulse. He slammed a grenade into the second last vehicle while Cahill followed suit with the following lorry. That acted as a signal for their comrades to open fire.

Joe Gilhooly describes an ambush by No 2 Section on a Black & Tan (Auxiliary police) lorry at Beresford Place in which Cahill & Gray also took part. It is not clear if it is the same one mentioned above; Gilhooly says it was a single lorry. The Section was in two groups of four. One including Gray, near Brooks Thomas; and the other near Butt Bridge on the quays. However, the first group only had the chance to throw a few grenades before the lorry took a route avoiding the second group. Shots were fired towards them as they left the scene. Section Leader Tom McGrath was wounded in the leg and had to be hospitalised.

The Section selected George Gray as his replacement. He probably led their operation not long afterwards which destroyed – with assistance gladly provided by the British crew – the military refuse lorry at Fairview Sloblands. From then on, No 2 ASU always acted in conjunction with No 1 as losses and lessons learned led to new recruits and a reorganisation. George returned to the ranks for those later operations.

Gray and No 2 ASU had the luck and skill to avoid any major disaster as had befallen No 1 Section at Clonturk in January 1921. However, at the Burning of the Custom House, the entire No 2 Section on duty inside the building was arrested, according to Joe Gilhooly.  Tom McGrath (in hospital) and Jim Cahill (on compassionate leave) were the only Section members to avoid capture. It was the day after George Gray’s 21st birthday when himself and the others were lodged in Kilmainham Gaol. He was released early on 15 October 1921 for unspecified medical reasons. 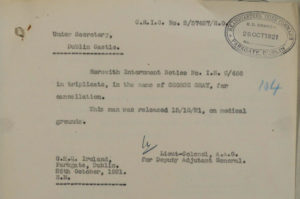 George joined the new Provisional Government (National) Army on 1 March 1922 at Beggars Bush as Private No. 05391 in the Dublin Guard. It seems his health was still not the best judging from the Army Census that November where he is listed at Marlborough Hall Convalescent Home, Glasnevin, a medical facility used by the military for wounded and ill soldiers (His personal details show his home address and mother’s name matching with the 1911 census). 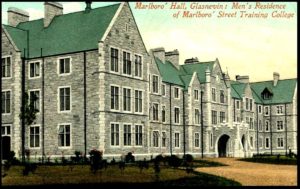 Despite health issues, an experienced and committed pre-Truce ASU fighter like Gray would probably have wished to stay in the military with his pals. And he would have been wanted by the new Army. Possibly he was ‘looked after’ by his old comrades out of loyalty so he could join up despite not being 100% physically fit to serve. There were other similar cases we are aware of, e.g. Charlie McMahon, the Custom House man with a bullet in his brain. Not meaning any dis-service, it is unlikely that George was able to see much, if any, active service during the Civil War.

By 1924 he had left the Army and returned to his family’s place at 9 Lower Dominick Street. He may have found work again for some time but sadly did not have long to live. On 10 December, he passed away at home from Phthisis, a term then used for tuberculosis (TB). His death record shows it was certified he’d suffered from that dreaded scourge for at least two years. Possibly he contracted it while in Kilmainham Gaol or during the horrendous realities of active service in the Tan War. Or perhaps it was a legacy of a deprived upbringing and youth in the notorious Tenements of Dublin.

In any event, George was gone at the early age of just 23, a sad echo of his biological father’s demise. His step-father George McMahon registered his death and the family death notice declared his membership of the ASU. On Saturday 13 December 1924, George Matthew Gray was buried in Glasnevin (St Paul’s ‘new section’ plot LE103, sadly unmarked). There was no press coverage of the passing of a young man who had fought in the Tan War just a short few years before. Hopefully some old comrades attended to give him the full military honours which he’d surely earned.

George’s mother Maryanne was widowed again in 1946 when her second husband George McMahon died. She herself lived to the age of 84, passing away at her home, O’Devanney Gardens off North Circular Road/Infirmary Road, in 1961.

It is sadly ironic that both George Gray senior and junior did military service yet each died from an illness. 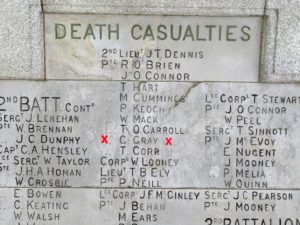 To this writer it is sadder still to consider that George senior who went to maintain the British crown’s control over a faraway colony is commemorated on “Traitor’s Gate”, the Fusiliers’ Arch in St Stephen’s Green.

But George junior who fought to free his own country from the clutches of the same crown has no memorial at all.

We knew of no photo of George until just recently. Relatives of Custom House man Jim Heery, Michael and Brian Heery, kindly sent us a photo of a group of ASU men, including Mr Heery, taken in Kilmainham. We had seen the picture before but the new version is labelled with handwritten names. 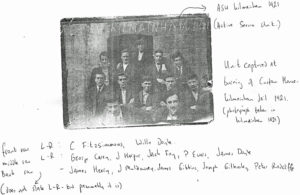 The name George Carey stands out. There is no record of a man of that name in the Old IRA or on any arrest or jail register. We strongly suspect the name Gray somehow was recalled as Carey after the passage of time over the years.

So, hopefully the first man on the left in the middle row is really George Gray. Perhaps some Reader can confirm?

George may have no headstone but he is not totally forgotten, RIP.