Custom House Prisoner Insights – Part 1: Where they came from

How much is really known about the Lads involved in the Burning?

Some Readers related to individuals have family memories and stories, even photos – many of which you have kindly shared. Those personal insight are brilliant. Please keep them coming!

In the background, our research has produced a spreadsheet of basic facts on the men (Credits listed at end). So we may as well share some analysis. Like where were they from? What ages were they on 25 May 1921? Had they anything in common apart from being arrested at the Burning? Were all of them really IRA members? What happened to them later?

We have not (yet!) identified let alone researched all of the several hundred who played some part in the Custom House operation. But we can start with one well-defined group – those jailed in Mountjoy and Kilmainham, comprising 103 names based on archive documents.

The first, compiled on 25 May, included a sizeable number of civilians uninvolved in the Burning. Most were later let go from Arbour Hill Detention Barracks and avoided jail.

The second list, created a few weeks after the Burning, named the men kept as prisoners, 98 in all.

Sadly we don’t know how many of those heroes had their Weetabix for breakfast on the morning of the Burning. But we can begin by sharing where they originally came from. 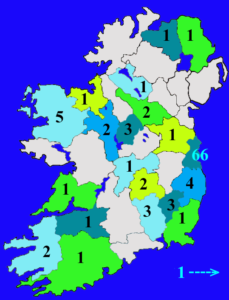 Arrested men by county of birth

From various records (listed at end) we’ve tracked down where all 103 came from.

The Burning was of course a Dublin operation, led by the northside 2nd Battalion. So, unsurprisingly, almost two-thirds (66) of those captured were Dubs. Sixty two from the city and four more from the county. For the city Dubs, a really important sorting shows the northside-southside split was 46:16! (OK, some would say jail is the natural place for a northsider….).

The remainder came from 19 different counties – plus one born in England.

A few of our smallest counties accounted for a surprising number – 3 each from Longford, Carlow and Kilkenny.

Finally, Cos. Clare, Cork, Offaly (then called King’s County), Limerick, Meath, Sligo and Wexford each had one native involved.

The sole prisoner not from this island, Cyril J. Daly, was born across the Irish Sea – but his father had emigrated from Glenties, Co Donegal.

Not as cosmopolitan as the 1916 men with their Scots, English, Yanks, a Finn and a Swede. However, the Custom House Fire Brigade jailed in Mountjoy and Kilmainham did represent all Four Provinces.

Reflecting social conditions of the times, every one of the men from outside Dublin city arrived as home births.

In the capital, only seven of the 62 city Dubs were delivered in a maternity hospital. Five in the famous Rotunda at Parnell Square on the northside; and two in Holles Street, on southside Merrion Square (Both hospitals are still in use).

Dubliner William Adderley had a younger twin sister, Elizabeth. Michael Love from Co Fermanagh was the younger twin of Mary, who sadly did not survive infancy. James (aka Joseph) Murphy was the elder of twin boys born in Dublin. Unfortunately the younger lad, Patrick, died at 5 months.

The only siblings captured were the Lanes, Edward ‘Ned’ and Michael from Dublin City.

Dubliner Tom Flood’s brother Eddie got away from the Custom House that day; and fellow-Dub Sam Robinson’s older brother Christy from Kevin Barry’s old 1st Battalion H Coy also escaped arrest. There may be other similar cases. We’d love to hear about them.

It would be remiss of us not remember the brothers Paddy and Stephen Reilly, killed in action at the Custom House along with fellow IRA Eddie Dorins, Sean Doyle and Dan Head. All were Dubliners.

We’ll end there for the moment. Occasional future articles will reveal more snippets.

(2) The first of two arrested not named on the lists was Dubliner Jim Conroy. His Military Service Pension (MSP) file and references confirm he was captured. We have not worked out the false personal details he gave. UPDATE, August 2020 – We now know the alias he used.

(3) A second ‘undercover’ prisoner is Joseph Griffin (2nd Battalion I/O, a Kerryman). We know from his photo in Kilmainham and his MSP file he was captured at the Burning. But no sign of him on the lists. He did use his real name in Cyril Daly’s autograph book, but must have used an alias when arrested. This we have failed to identify.

(4) The severely wounded man was Charlie McMahon (shot in the head at the Burning). He was kept under arrest in KGV Military Hospital.

(5) Jack Young was initially held in Arbour Hill but was released when the British could pin nothing on him.

(6) Mick Stephenson is the ‘honorary’ CH Fire Brigade Prisoner. He narrowly escaped arrest at the Burning. Only to be jailed in Mountjoy on another charge a week later.

Information on births based on official records from the General Register Offices of Ireland and England & Wales and/or 1901 & 1911 Census returns.